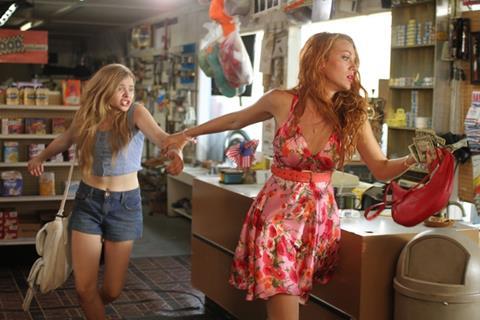 Lymelife director Derick Martini goes badly off the rails with his second feature Hick, an overly familiar coming-of-age drama that morphs into an unconvincing slice of blood-soaked Southern gothic nastiness. The adaptation of Andrea Portes novel does provide a showcase for the dramatic range of rising stars Chloe Grace Moretz and Eddie Redmayne but otherwise has few elements likely to beguile the average viewer.

The film’s compensations come in the central performances.

Hick represents an extremely difficult sell for any potential distributor, especially in a theatrical market where it would struggle to make a favourable impression. In terms of her emerging talent and the character’s baby doll wardrobe, Chloe Grace Moretz is very reminiscent of Jodie Foster at the time of her success in Taxi Driver. She plays Luli, a Nebraskan girl who is 13 going on 30.

Abandoned by her white trash mother and her drunken father, Luli decides to head to Las Vegas armed with her sketching pad, a handgun and a rich fantasy life that includes a fondness for classic Hollywood dialogue. Does any 13 year-old really quote Norma Desmond and Dirty Harry lines?

What begins in the vein of Juno (complete with self-aware teen, excessive voice over and twee drawings) then develops into a picaresque road movie as the traveling Luli encounters grifter Glenda (Blake Lively), the sweet-natured Clement (Rory Culkin) and psychotic cowboy Eddie (an impressive Eddie Redmayne).

Just when it seems like we might have a handle on the film it awkwardly changes gears once again to stray into Jim Thompson territory as the possessive Eddie becomes increasingly unhinged and violent.

None of what is presented to us carries a great deal of conviction and more often than not just seems odd rather than plausible. The lack of a cohesive tone or any sense of great urgency leaves the film to limp along through a disjointed story that rarely catches fire.

Odd moments compel attention but never build into anything satisfactory. Juliette Lewis is cast to type in a brief role as Luli’s wild, unreliable mother and Alec Baldwin makes a similarly brief appearance as a kindly benefactor.

The film’s compensations come in the central performances. The camera loves Chloe Grace Moretz and Martini frames her in loving close-ups allowing her the chance to express a gamut of emotions from flirtation to fear, wistful longing to stoical endurance.

British star Eddie Redmayne matches her charisma as Eddie, sporting a very credible and impeccably sustained America accent along with a jet-black cowboy hat and a permanently sinister smile. Both performers are in the early stages of careers full of promise but Hick is not the film that will take them to the next level.