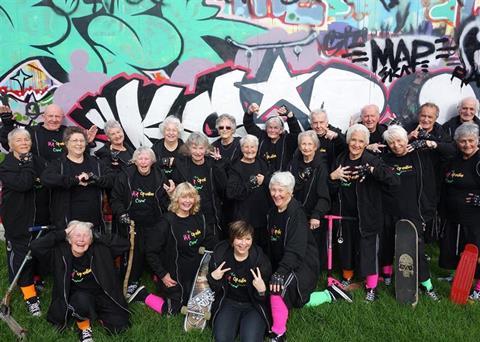 An engagingly fluffy documentary that is packed with moments to smile at, Bryn Evans’ Hip Hop-operation (the title feels very self-aware, bit at least reflects the tone of the film) is an easy-to-watch delve into the antics of 30 senior citizens (the oldest of whom is 96) based on a small New Zealand island who are preparing to take part in the World Hip-Hop Dance Championships in Las Vegas.

Under the indefatigable leadership of the highly motivated Billie Jordan this bunch of feisty older folk are convinced they will make it to the US.

The film, which had its international premiere at IDFA following a screening in New Zealand, is never challenging or overly dramatic, but it does a fine job in covering a series of personalities – most of whom admit to not being hip-hop fans – are they bond, sway, shuffle and sometimes dance. There is real fun to be had as they slip into hoodies, caps and even bright coloured leg warmers as they try and show off their moves.

Under the indefatigable leadership of the highly motivated Billie Jordan (who movingly explains how witnessing the horrors of the 2013 earthquake that struck Wellington made her relish life) this bunch of feisty older folk are convinced they will make it to the US, even before their have been selected by the organisers.

As Jordan comments: “You’re all going, even if it’s in an urn,” and while wheelchairs and artificial hips may hamper some freeflowing dance moves these would-be dancers are smart and savvy folk who are relishing the chance to bond and move. The film smartly focuses on the personalities rather than the rehearsals, and while some are modest about talking about themselves the back-stories are fascinating, especially that of Maynie Thompson who after having children became an anti-Vietnam peace-walker in the US.

Given hip-hop names – such as Quicksilver (for Maynie), 2-Cents, Missy Ro-yo, Diva Mystic and Billie J Buzz (for Billie, the teams far younger teacher) – they meet up with younger New Zealand crews (who are all charming and supportive) and eventually get the call that they will be able to give a special presentation at the 2013 Hip-Hop International world championships in Las Vegas.

There are a few obstacles – money, a partner with dementia, denture problems and a doctor who expressly forbids it – and the footage in Vegas is engaging, but the film isn’t so much about the journey but about the people. And they are inspirational in themselves.