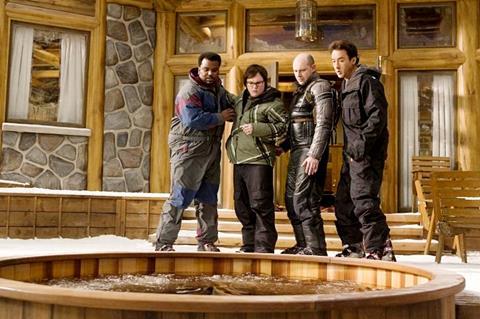 A wild, hit-and-miss stab at high-concept comedy, Hot Tub Time Machine should find a mostly welcome reception with younger audiences willing to submit to its slipstream rhythms, but most moviegoers will deeply feel at least some nagging lack of narrative underpinning and an infrastructure crucially undercuts momentum and goodwill.

The movie gives Cusack a chance to re-exercise his comedic muscles, and there are a few in-joke nods to his adolescent filmography.

Decidedly more lewd than the time-traveling Bill & Ted movies of nearly two decades ago, Hot Tub Time Machine seems certain to open huge, courtesy of an effective viral marketing campaign positioning the movie as a guys-gone-wild comedy, a la last summer’s runaway smash hit The Hangover. Mixed word-of-mouth should dent staying power, however, along with the April 2 arrival of spectacle entertainment Clash of the Titans.

On the heels of a possible suicide attempt by their wayward friend Lou (Rob Corddry), Adam (John Cusack) and Nick (Craig Robinson) decide, with Adam’s nephew Jacob (Clark Duke) in tow, to return to a ski lodge that served as the site for some of their most memorable teenage partying. After a night of debauchery, they wake up in 1986. At first the guys decide to try to exactly recreate events from their past, so as not to upset the future. In fitful half-measures, however, that plan begins to erode.

Too much humor unfolds as weak counterpoint to easy ’80s targets, which is fine for background visual jokes but difficult to hang a story on. Lou’s arc is the strongest, but other characters’ dilemmas aren’t particularly well integrated into proceedings, and it’s especially disappointing that Sex Drive writers Sean Anders and John Morris’ rewrite of Josh Heald’s credited original story doesn’t more readily embrace either a delirious, damn-the-consequences reliving of party days or a concerted group effort to get back to the present.

The movie gives Cusack a chance to re-exercise his comedic muscles, and there are a few in-joke nods to his adolescent filmography (the 1985 films Better Off Dead… and his hit The Sure Thing). The film should most provide a bump in profile for Corddry, though, who injects a scene-stealing level of gleeful mania into his portrayal of the toxic Lou.

Screenplay: Josh Heald and Sean Anders & John Morris, based on a story by Josh Heald