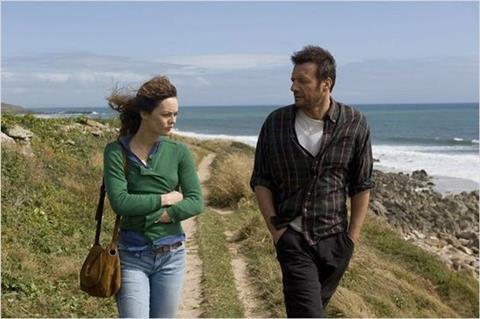 A batch of semi-endearing characters - some living and some dead - interact with a young career woman who makes the trip from Paris to windswept Brittany to sell the abode her recently deceased aunt left her in House In Brittany (Cornouaille). Actress-turned-director Anne Le Ny’s third film is leisurely and heavy with emotion yet slightly stiff… a sort of Uncle Boonmee for people who prefer a semblance of plot with their striking imagery and ubiquitous departed souls.

Paradis projects an aura of believability that keeps the film afloat.  She’s very good - and not at all glamorous - as a modern woman faced with wrenching choices that are also potentially freeing.

Vanessa Paradis is in nearly every frame as pragmatic Odile who slowly gets the hang of living in a scenic locale she associates mostly with death. The first five minutes deftly establish that travel agency owner Odile has been having an affair with married father Fabrice (Jonathan Zaccaï) on and off for over ten years. Right now the lust barometers are cranked up high for both parties but he can’t get away to accompany her to Brittany.

Odile is a take-charge, independent individual but she’s full of trepidation.  The beautifully situated house in question is where her father died on a summer visit when she was only 12 and, pushing 40, she hasn’t been back since.

Her mission, that she tackles with testy expediency, is to sell the place as quickly as possible. But an accommodating local, Loic (Samuel Le Bihan), seems stunned that she’d willingly part with such a choice property. Loic claims he was the first boy she ever kissed, but Odile has no memory of him.

The film’s supernatural aspects are as matter-of-fact as can be. Viewer enjoyment or frustration will be closely pegged to how well one thinks this is pulled off. Dreams and waking hallucinations reveal how Odile’s father died, how it her mother and aunt were affected and how Odile has buried lingering emotional fallout ever since.

The scenery is sweeping, the neighbour’s teen son is a casual connoisseur of local rituals and legends (“Aren’t there any that don’t revolve around death?” asks Odile) and Odile remains remarkably grounded as the departed materialize for pointed chats.

The film accrues cumulative power yet also seems to be spinning its wheels as the puzzle of Odile’s defence mechanisms and gradual shedding of lingering grief is slowly explored.

Le Ny’s directing debut Those Who Remain was a small gem of spoken and unspoken feelings in which Vincent Lindon and Emmanuelle Devos gave superb performances as strangers who strike up a friendship while visiting their respective dying spouses at the same hospital. Her second film, My Father’s Guests, was a bittersweet comedy about family dynamics thrown into upheaval when the adult son and daughter of a well-to-do man with a humanitarian streak learn that Dad has decided to leave his estate to a newcomer.

Here Le Ny combines themes from her previous work but this venture’s supernatural-cum-therapeutic approach will not be to all tastes.

Whether cranky or delighted, Paradis projects an aura of believability that keeps the film afloat.  She’s very good - and not at all glamorous - as a modern woman faced with wrenching choices that are also potentially freeing.

Viewers in countries where abortion services are few and far between or outright illegal will find the French approach to respecting a woman’s right to interrupt a pregnancy striking.