If The Seed Does Not Die 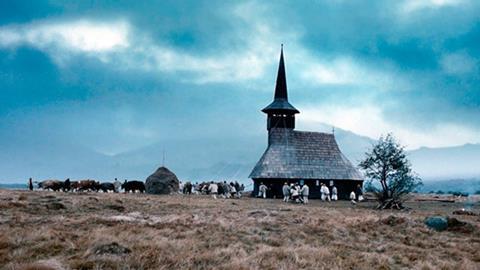 The title, taken from a Biblical quote (“Truly I say to you, if a seed of grain does not go into the earth and dies, it is still a seed and no more, it dies, it yields a rich harvest” – John 12:24), is supposed to convey the distinct message that when a seed dies in the earth, it will yield a rich harvest.

There is no denying the rich vein of Dragin’s visual inspiration and constant search of unusual locations.

But Sinisa Dragin’s film, an apocalyptic, impressionist portrait of Balkan chaos and gloom, prefers to dwell on the first part of the quote, dealing with death and destruction. Though he does end on two young faces gazing in wonder at a ghost church emerging out of the Danube, this is hardly the rich harvest promised by the Holy Scriptures. The film screened at the Transylvania International Film Festival.

If The Seed Does Not Die (Daca bobul nu moare) is atypical festival film, featuring rich imagery but hardly any coherent narrative. Using German, Romanian and Serbian dialogues and moving back and forth between the Romanian and Serbian sides of the Danube, with a large cast and a dearth of symbolical incidents which will doubtlessly provide ample grounds for critical observations, its future outside the arthouse circuit is hard to imagine.

In Dragin’s tale of woe, two fathers meet in a shack by the Danube, crossing the river in opposite directions, each one looking for his child. Jorgovan (Mustafa Naderevic), accompanied by a friend’s son, Prle (Milos Tanaskovic), is on his way to Romania to retrieve the body of his own son Milan, a deserter from the Serbian army who escaped across the river and was killed there.

Nicu (Dan Condurache) is going the other way, from Romania to war-torn Kosovo, looking for his daughter, a student that had been kidnapped and sold to a Serbian pimp. With him, a young Romanian prostitute, Nora (Simona Stoicescu), running away from her father and eager to grab some of the action in that same Kosovo, which she believes offers great opportunities for girls in her profession. There is a third, 200 year-old, journey, symbolically linked to the other two. At a certain point in the past, when Romanians were forbidden to build churches, some peasants acquired an already existing one across the river and set out to drag it all the way to their own village.

There is very little that does not happen in the course of these three separate journeys. The sequence of surrealist events is never ending, Dragin jumping from one tale to another with the kind of grim determination that constantly ads new obstacles preventing all sides to achieve their goals, which indeed remain beyond their reach until the very end.

Everything from police corruption to gypsy resourcefulness, from greed and total lack of morals to the worst of iniquities (a father must have sex with his daughter to obtain her freedom), displayed on the scarred background of communist physical and mental ruins and memories that haven’t been quite shaken off (Tito and Ceausescu are still secretly revered).  Combined with stunning natural landscapes, everything leads to the ultimate conclusion that life is no better than death in this kind of abysmal life, in which Jorgovan’s son and Nicu’s daughter end up floating, side by side, in the sunken belly of the church on wheels, lying now at the bottom of the Danube.

Dragin’s approach to cinema might be best described as a humuorless version of Emir Kusturica, a Balkan epic all the more bleak and hopeless without the commercial saving grace of Kusturica’s frenetic joie de vivre.

There is no denying the rich vein of Dragin’s visual inspiration and constant search of unusual locations, effectively supported both by the cinematography and set designs, and if the acting seems at times excessive, so are the incidents they support. They require a patient audience willing to unravel the many hints about the present desperate state of Eastern Europe and the dubious contributions of a nefarious West to this condition.

Though there is no doubt whatsoever that the seed is indeed dying - as per the film’s title - a strong religious strain going all through this picture suggests that faith might be the only hope to harvest something out of a world on the brink of disaster.  What exactly, that is not quite clear.