In Darkness We Fall 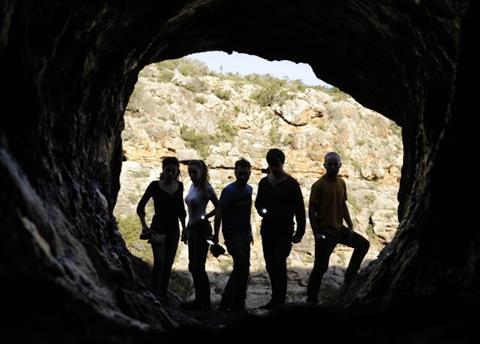 A slickly made and very chilling horror-thriller, Alfredo Montero’s tense and elegantly nasty In Darkness We Fall may well be rather familiar fare – using that old faithful, the ‘found footage’ style of shooting – but it succeeds in keeping the tension at a pretty high level.

There is nothing massively original about In Darkness We Fall, but it is a well-sustained horror-thriller.

The film – which premiered at Rotterdam and also screened at the Miami International Film Festival – has the original title of La Cueva (The Cave), which gives a pretty clear idea of where this low-budget horror tale is heading.

It all kick-off in fairly tame fashion as five friends head off on a holiday to a small, remote, island. On the whole they are a pretty annoying bunch, drinking too much as damaging stuff. When they discover a cave they convince each other that it might be ‘fun’ to explore, but they end up going too far and when they try to head back they can’t retrace their steps.

They have no food or water and their flashlights soon start to fail – though luckily their infrared video camera picks up the proceedings – and as they get more and more hysterical and they start plotting rather extreme way of trying to survive.

Of course the cave-based horror film has been around for a while, but the film trades well on the intense and smoothly shot claustrophobia that defines the genre. Cue plenty of nastiness in the darkness – all captured via the camera – as the film manages to layer in plenty of nasty twists-and-turns before heading towards a satisfyingly dramatic and intense climax. The film is beautifully shot, and the fact that these are a bunch of largely unpleasant characters makes it all the more intriguing.

There is nothing massively original about In Darkness We Fall, but it is a well-sustained horror-thriller with Alfredo Montero always in control of the elements and crafting a nicely tense film with more than its share of well-structured jumps.