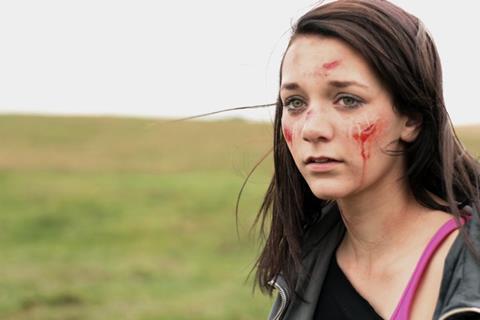 A return to feature films from trashsploitation auteur Alex Chandon, a full decade after his anthology film Cradle Of Fear, this is a transplantation of the mode of H.G. Lewis’s (already remade) gore movie classic Two Thousand Maniacs! from the Deep South of the US to the Far North of England. It follows several other British ‘weekend break’ horrors (indeed, it seems to owe something to Peter Stanley-White’s little-seen Small Town Folk) and even reuses the recent commonplace (Wilderness, Wild Country) of pitting inner-city troubled kids and well-intentioned social workers against rural savagery.

Chandon is a good-humoured slosher of splat, but uninterested in such refinements as character, plot, subtlety or the possibility of anyone surviving this night of horrors.

Genially gruesome, if hackneyed, Inbred played to an enthusiastic crowd at the UK’s recent horror-loving FrightFest but its lack of sympathetic protagonists and tendency to one-damn-thing-after-another plotting might prevent it from crossing over to become the splatter film version of The Inbetweeners Movie.

Earnest liberal feeb Jeff (James Doherty) and ballsier female care worker Kate (Jo Hartley, the only player here to attempt anything like acting) are in charge of an undercharacterised, mostly unpleasant group of doomed London kids (a hooligan, a pyromaniac, etc) driven to remotest Yorkshire to renovate an old cottage and reclaim copper wire from decommissioned trains.

In The Filthy Hole pub, landlord Jim (Seamus O’Neill - like Hartley, a Shane Meadows regular) serves up ominous ‘scratchings’ and the (inbred) locals leer at the ‘outsiders’. Straw Dogs-ish skirmishes between town and country escalate, but suspense is abandoned when the newcomers are captured and sentenced to take part in the ‘shows’ which Jim, in vaudeville-style blackface, presides over. Here, the special effects crew take over to make a spectacle of the victims, who are despatched in set-piece ways, which include being pumped literally full of shit and exploding. Incidental jokes poke fun at such stereotypical Yorkshire practices as keeping a ferret in one’s trousers and shouting ‘Ee Bah Gum’ (title of a song which parallels Lewis’s ‘Eee-Yah, the South’s Gonna Rise Again’).

Chandon is a good-humoured slosher of splat, but uninterested in such refinements as character, plot, subtlety or the possibility of anyone surviving this night of horrors. Inbred has a few interesting locations (the abandoned trains) and a lot of character faces, but is too monotonously riotous to break out of its cultish cul de sac the way that Jake West’s Doghouse or Tom Shankland’s The Children, among recent British horror films, have.

Not exactly an advance over the more complex Cradle Of Fear, it does go so far in its cartoonish depiction of the North - the nightmarish version of working-man’s club horror comedy is its most memorable stroke - that it could be used as a propaganda tool to warn Southern softies against travel beyond Watford, though its inbred jokes could as easily be applied to Wales, Norfolk, the West Country or anywhere beyond London.