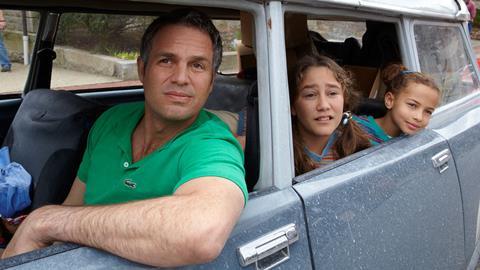 When we first see Mark Ruffalo’s Cam Stuart, frolicking through the New England countryside with his two daughters, he seems like the kind of fun-loving Dad every child would love to have. But the wild eyes, mussed hair and manic energy cloak a disturbing reality: He’s suffering from bi-polar disorder. Innocent wackiness quickly gives way to nearly naked freak-out, and the next thing you know, his wife Maggie (Saldana) is huddling inside the backseat of their locked car, sheltering the kids and terrified at what he might do next.

Alternating between highs and lows, fury and fragility, aristocracy and hippie, the silliness of an excitable boy and the pathetic nature of a mentally unhinged man, Ruffalo makes an eccentric character likeable and credible.

Much like its protagonist, Infinitely Polar Bear wavers between joyous hijinks and disturbing breakdowns, and the more you spend time with it, the more it grows on you. While not as laugh-out-loud funny as Little Miss Sunshine or as powerful as The Kids Are All Right, this accessible dysfunctional family comedy has enough heart and substance to potentially cross over into multiplexes in the US, and possibly around the world.

Based on screenwriter Maya Forbes’s (Monsters vs. Aliens) life growing up in Cambridge in the 1970s, Infinitely Polar Bear follows the Stuart family trying to survive during a period of both economic uncertainty and mental instability.

With Cam out of a halfway house and ready to restart his life, Maggie embarks on finding a way to kick-start her career. After being accepted at Columbia business school in New York, Cam is charged with taking care of the kids in Boston. It may be a risky proposition for an alcoholic manic-depressive chain-smoker who doesn’t want to take his Lithium, but he’s up to the challenge.

While the set-up may be formulaic, and there’s plenty of familiar humor based on Cam’s struggles as a single parent, many of the situations are made unique. For instance, there’s a fabulous sequence in which Cam strives to sew together a flamenco dress for his youngest daughter, made all the more funny and twisted as Cam is operating on a manic high. And the girls’ sometimes snappy retorts to their hot-heated father also can be surprisingly funny (i.e. “I’d rather die than let people see our shithole”—and that’s out of the mouths of babes.)

We also learn that Cam comes from a blue-blood Boston family, with a moneyed background that affords him at least the notion of privilege. Some of the script’s humor comes from the disconnect between Cam’s poor and disheveled reality and the bowties, Bentley cars, and rich elderly relatives from once he came.

The film’s 1978 period also offers additional specificity. Throughout the film, Forbes gently touches on the gender politics of the time, with stay-at-home-dad Cam feeling increasingly emasculated and aspiring breadwinner Maggie encountering a particularly low glass ceiling. Little is made of Stuart and Maggie’s mixed-race coupling, which is refreshing in its subtlety.

But the film relies mostly on Ruffalo’s committed performance. Alternating between highs and lows, fury and fragility, aristocracy and hippie, the silliness of an excitable boy and the pathetic nature of a mentally unhinged man, Ruffalo makes an eccentric character likeable and credible, despite certain script choices that seem aimed at quick laughs rather than realism. For her part, Zoe Saldana effectively displays the immensely difficult choices that working mothers must face. Near the end of the film, one such scene builds to a crescendo of tears that is undeniably affecting.

Indeed, Infinitely Polar Bear exemplifies a kind of American indie dramedy that may be recognizable to audiences, with its touching journey, of both parents and children coming of age together. But it still works.