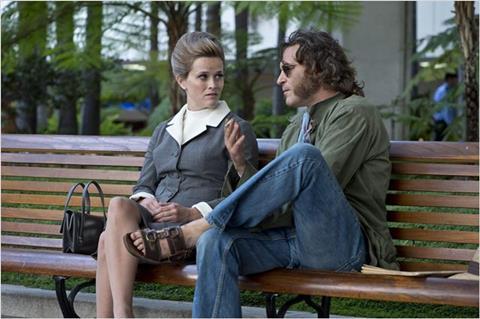 Robert Altman described the mumbling Philip Marlowe (Elliott Gould) of his anti-romantic neo-noir The Long Goodbye as “Rip Van Winkle.” He meant that Raymond Chandler’s gumshoe had fallen asleep in the benighted mean streets of 1940s Los Angeles to wake there three decades later when his brand of hard-boiled knight errantry was irrelevant. Marlowe has now arisen again in the Cheech Marin-like guise of Larry “Doc” Sportello (Joaquin Phoenix), the stoned beach bum of a shamus who burrows like a worm through the cartoonish SoCal moral squalor of Paul Thomas Anderson’s serio-comic post-noir caper Inherent Vice.

The first American adaptation of a Thomas Pynchon novel, Inherent Vice continues Anderson’s formidable run of dynamic, sophisticated powerhouse movies, hence its selection as the centerpiece of the current New York Film Festival. Analogous to Anderson’s Boogie Nights in its anything-can-happen momentum and implied critique of off-the-charts decadence, less obviously to There Will Be Blood and The Master as an analysis of power, corruption, and venality, Anderson’s pop-crazy noir pastiche is a certain best picture Oscar nominee – one that may worry the Boyhood camp.

Playing a character charged with being proactive, Phoenix paradoxically dominates the screen less as Doc than he did as the furtive, passive, Freddie Quell of The Master, Anderson’s last outing. As Doc travels in a marijuana haze from one bizarre scenario to the next on a double-MacGuffin quest to find two missing men, he assumes the spectator-like role of incredulous witness to an array of hippies, drug casualties, rock and rollers, groupies, sex workers, thugs, cops, Feds, and evil magnates. Together, they embody collectively the cultural-economic conflict between the seedy remnants of the peace and love brigade and the corrupt establishment. In the wake of the Manson Family Murders, Doc finds there’s hardly anyone left who isn’t tainted and paranoid.

Doc’s ex-girlfriend, Shasta materialises like an apparition before him in the crepuscular first scene proper. Still in love with her, he agrees to investigate a couple conspiring to have her current lover, the ultra-sleazy cheap-housing tycoon Mickey Wolfmann (Eric Roberts), committed to an asylum so they can steal his fortune. The female schemer is Wolfmann’s English wife (Serena Scott Thomas), whom Doc interviews briefly in a poolside scene lifted from the pulp masterpiece Robert Aldrich made of Mickey Spillane’s Kiss Me Deadly. Shortly afterward, a recovered heroin junkie mom (Jena Malone) elicits his chivalrousness when she  asks him to locate her husband, a surf-rock saxophonist (Owen Wilson) desperate to quit his undercover gig as an FBI stooge forced to infiltrate subversive groups like the Black Panthers.

Spillane’s fascistic Mike Hammer is essentially reborn in Christian F. “Bigfoot” Bjornsen (Josh Brolin), an arrogant, showboating LAPD detective (hilariously in thrall to his ballbusting wife) who bothers Doc more than his other opponents. These include Wolfmann, his Aryan Brotherhood biker bodyguards, and everyone – including a dandified dentist (Martin Short) fronting a lucrative drug den and a suavely menacing powerbroker (Martin Donovan) – connected with The Golden Fang, a semi-mythical heroin cartel and tax shelter that assumes opulent ocean-going and terrestrial forms whenever it looms before the hapless Doc.

Anderson occasionally slows Inherent Vice’s antic momentum with the use of Neil Young ballads and other songs. Jonny Greenwood’s low-mixed classical score emphasises (as does Newsom’s narration) the mood of cosmic alienation always bubbling below the film’s surface. Fatalism takes hold once – crucially late in the picture.

Inherent Vice’s commercial prospects are strong, nonetheless. (It will outperform The Master, a near-masterpiece too troubling for mass-market acceptance.) Yet Warner Bros. is unlikely to have a stratospheric hit on its hands. Doc’s investigations promise violent action that Anderson seldom delivers, while the convolutions of Pynchon’s maximally serpentine absurdist plot will irritate many viewers. The narrative actually contains no development that can’t be followed – as was the case with Howard Hawks’s The Big Sleep, despite the legend – but it requires fierce concentration, possibly several viewings.

Exceeding even the stellar line-up of Anderson’s Magnolia, Inherent Vice is jammed with stars excelling in small roles, including Reese Witherspoon as Doc’s uptight sometime squeeze in the D.A. office and Benicio Del Toro as his laid-back marine lawyer buddy. Also on display, it has to be said, is a surfeit of hot bodies, though most of them pointedly radiate tackiness rather than health and efficiency.

Screenplay: Paul Thomas Anderson, based on the novel by Thomas Pynchon