Jake Oelman on his SXSW film about his father Robert, a former psychologist who left his life behind to move to Colombia where he spends his days photographing rare insects. 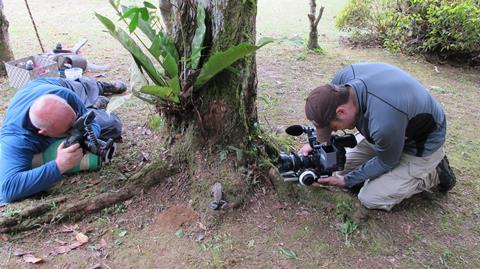 Jeremy Berkowitz hears about insects, the art of capturing nature, and what each man learned about the other in the process of making the film.

I just wanted to say that since the film ended insects and their role in life has been on my mind.
Robert Oelman: We don’t think about insects. We don’t think about them except for the insects that come into our house and bother us. Every day some insect is trying to get my blood. So, I’m thinking about them. But the kind of insects you see in the photos are not those insects. They’re really from the deep jungle in the Amazon. It’s a totally different ball game.

Why did you decide that now was the time to take on this subject matter?
Jake Oelman: I really have been working on this for a long time. I think that the idea was planted in my mind probably back in 2005. As my dad’s photography progressed, I would go and visit him and see what he was working on. From there my idea of this film progressed as well. And I think there was probably that time around 2011 or 2012 where he was really amassing a large number of insect photos that I had never seen anything quite like before. It was kind of a natural progression.

What was it like being filmed by your son?
RO: It felt pretty natural. I’m used to Jake with a camera. For the filming part, I was comfortable because I really appreciate the interest. Normally, nobody takes any interest into what I’m doing. So, that was cool.

What’s the biggest thing you learned about each other’s art in this process?
JO: It’s a very miraculous kind of thing. When I originally started, with the idea back in 2005, my main interest at that point was that my dad had moved to South America and started his life anew. Anytime that anyone would ask me about my dad, and I would tell him the story they were always fascinated. They wondered how someone could pick up and leave their old life behind, and start a new life for themselves.

That was kind of the nucleus of the idea for me. But as the years went by he just really started to focus on these insects, and the photography just kept getting better and better and better. So, when you watch your father grow in that capacity and become and artist and become more comfortable in his skin, he really is a different person from the guy I grew up with. That was really rewarding for me. You know, I’m an artist, too. So, there was a lot of validation in seeing that process unfold.

RO: Going back four years ago, I didn’t know if Jake was organised enough to put all the pieces together for a documentary. In the last four or five years, I’ve learned that Jake knows how to put everything together. It’s very complicated doing any kind of film, and he’s putting all these pieces together. It makes it really good work. That’s one thing I learned anyway.

I noticed there was video in the film of the insects that was just as beautiful as the photos. Who captured those?
JO: That was video that I shot. What we had talked about beforehand was just talking making sure that I had good macro lenses when I was going on the trip. I shoot everything in prime lenses. Every once in a while I’ll use a zoom. The filming was so much of a balancing act. I’m trying to focus on the work and what he’s doing and his reaction to what he’s doing. But I also need to focus on what he’s focusing on.

So, if he would get finished shooting a subject, then I would often slide in there, get my macro lens on, and shoot as much coverage as I could before we had to move onto the next subject, whether that was a spider or a tree hopper or katydid [bush cricket] or what have you. This was my first time shooting macro and shooting nature. And I learned that it’s really difficult. I had a new appreciation for what he is able to do technically.

Robert, does the empathy you’ve grown for these insects help expand your empathy for all humanity?
RO: So, I’m doing the work with the insects and I’m getting a sense of what their reactions are to being handled; to being photographed. Many of them have similar reactions that perhaps a person would have. For example, frequently an insect will be scared by the appearance of the camera. It will turn around in circles to avoid seeing the camera. So, they have fear reactions like people do. The thing about caring about insects is it carries over to caring about all kinds of animals. So, now I have much more empathy for every animal. I’m not as much focused on people now, but it does carry over.

Off the top of your head, Jake, can you describe your favourite image you’ve seen your dad take?
JO: It’s hard to say one picture or one image. But I think some of the katydids. They have incredible features — pink horns, blue mandibles, and different coloured spots on their faces. There’s just something so intricate and interesting when you look at those facial structures. I don’t see it that you’re seeing an insect. It’s almost like you’re seeing another type of sentient being. That really had a big impact on me. Before this I was squeamish of your household insect. But now you have a mantis or a katydid on your hand. It’s just this childlike curiosity that takes over — you’re really in the presence of something special.

If there’s one thing you hope people would take from the movie what would it be?
RO: In general, I would hope people looking at the movie would have a greater appreciation for the natural world and get more into nature. People nowadays are people of the city. They don’t know much out nature. Get out and appreciate the life forms out here and the planet as a whole.