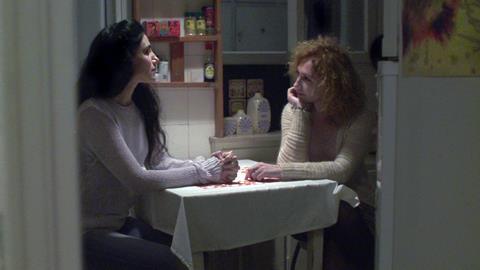 Michel Aviad’s powerful and provocative debut feature Invisible is the gripping story of two women who meet by chance and realise they are still haunted by a shared nightmare from their past. Driven by passionate and impressive performances by Ronit Elkabetz and Evgenia Dodina, this haunting Israeli film will be a fixture on the festival circuit and has the resonance to also appeal to art house distributors.

Michal Aviad shoots with a good deal of restraint, never exploiting the harrowing subject matter, but allowing the moving story of two women dealing with a long repressed trauma be told in an engrossing and emotive manner.

The charismatic two lead actresses will be the driving force behind the film which details how two intelligent and driven women attempt to deal with the fact that they were victims of a serial rapist (dubbed ‘The Polite Rapist’ by police and media) some 20 years earlier.

Aviad’s film is a work of fiction but with real facts and incidents worked into the story - the characters are imagined, though the rapist, who raped 16 women and girls in Tel Aviv in 1977-78, is real, and two vocal testimonies of actual victims of the rapist are interlaced into the film.

Reserved television editor Nira (Dodina) comes across Lily (Elkabetz), a left-wing activist, while covering an event, and realises that she knows her from attending the line-up to identify the rapist some 20 years earlier. Both are strong, independent, women but at the same time both are haunted by what happened in their past.

Nira, mild-mannered and living with her young daughter, becomes obsessed with looking back to the rapes and what happened to the rapist and gently inserts herself into Lily’s life. Lily is married with two grown-up children, but her marriage is failing with her husband feeling he has nothing to offer this self-contained and determined woman.

The two women gradually spend more time together, recalling the terrible moment of their rape; delving into court records and eventually driving to the house of the rapist, who was released after just 10 years, despite being found guilty of being a serial rapist.

As usual Ronit Elkabetz makes a striking impact as the seemingly perfect wife/mother/campaigner whose life is beginning to crack ever-so-slightly, with her glacial aloofness meshing perfectly with the character of the forthright Lily who gradually realises she must deal with the horrors of her past. Equally fine is Evgenia Dodina, with her frizzy fair hair and sense of compassion a physical contrast to Elkabetz, but who realises that re-living the past will help the two women deal with their futures.

In her debut film, director Michal Aviad shoots with a good deal of restraint, never exploiting the harrowing subject matter, but allowing the moving story of two women dealing with a long repressed trauma be told in an engrossing and emotive manner.