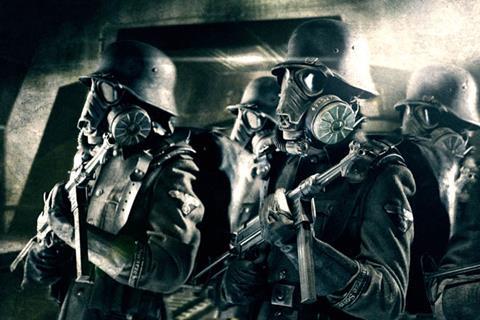 Iron Sky revels in its B-movie status, and tip-toeing a fine line in political incorrectness it unleashes sci-fi special effects mayhem onto an unsuspecting world…well, certainly a world that has no idea that a secret Nazi space programme evaded destruction at the end of World War II and relocated to the Dark Side of the Moon awaiting the perfect moment for the return of the Fourth Reich.

There is a lot of smart sci-fi fun to be had with Iron Sky which nicely blends its comic-book sensibilities with B-movie action.

The concept for this freewheeling sci-fi comedy is a strong one and for a good deal of the time it delivers good-natured genre entertainment, with the cast sensibly taking it all very seriously and the film punctuated with some impressive action effects that belie its modest budget. Genre fans should lap up the film, and while lack of known stars and the fact it is partially subtitled could impact on its ability to break out there is no denying the film’s marketing buzz.

Though the majority of Iron Sky’s €7.5million budget came from traditional sources, close to €1million came from Iron Sky fans, and the social networking support for the film should not be underestimated.

The secret Nazi base on the moon is deemed under invasion when American astronaut/male model James Washington (Kirby) ands his Lunar capsule a bit too close to the Nazi’s helium mining operation. He is captured and dragged off to be interrogated by Nazis who think he may be part of an advance force…when in fact he is only there as part of a publicity stunt for the US President (Paul).

When they see then computing power in his humble mobile phone they realize only on Earth can they find the processing power to finally launch their flagship spacecraft, the massive Gotterdammerung, so two Nazi officers, ruthlessly ambitious Klaus Adler (Otto) and idealistic English-speaking teacher Renate Richter (Dietze), are sent to earth to snag some more mini-computers.

But Klaus has other plans and initially allying himself with the President and her super-sexy advisor Vivian Wagner (Sergeant) he plots to usurp the Moon Fuhrer (a nicely droll performance by cult favourite Udo Kier) and take over for himself.

There are some delicious moments – such as petite and striking Julia Dietze showing her classroom of children a clip from Chaplin’s The Great Dictator to show the benevolent ambitions of Hitler – balanced by some truly impressive special effects. The Nazi invasion of the Earth, with giant zeppelins dragging moon rock to catapult at the planet, and the space dog fights (with the spacecraft USS George W Bush leading the fight back) quite brilliant. Another nice moment comes when it turns out that all of the Earth’s countries have in fact armed their spacecraft, much to the annoyance of the Americans…apart from modest Finland.

In fact, when these Nazis are still spacebound the film is at its best. When it gets to Earth the story struggles to find its momentum, despite the game efforts of Gotz Otto (who played Herr Stamper in Bond film Tomorrow Never Dies) and Julia Dietze (called upon to play her role demure-but-sexy) who hold he film together.

There is a lot of smart sci-fi fun to be had with Iron Sky which nicely blends its comic-book sensibilities with B-movie action. The attack scenes are as good - at times - as those in Skyline and Battle: Los Angeles, and the knowing sexuality and broad un-PC humour slots in nicely with the ludicousness of Nazi’s driving motorcycles and old Volkswagons across the lunar landscape.

Screenplay: Michael Kalesniko, Timo Vuorensola, based on a story by Johanna Sinisalo and a concept by Jarmo Puskala