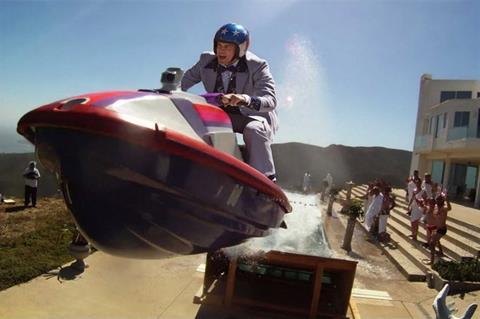 Ten years after debuting their hopelessly juvenile reality stunt show on MTV, the people behind Jackass still haven’t grown up at all – and thank god for that. With Jackass 3D – the troupe’s third film together and their first shot largely in 3D – director Jeff Tremaine, Johnny Knoxville and his gang of lovable idiots remain defiantly scatological, offensive, and very funny.

Knoxville and his cohorts have found genuinely novel new stunts that are alternately gripping, painful, horrifying, and hypnotically compelling.

Opening this weekend in the US, this Paramount release hopes to lure in the young men who made the first two low-budget instalments hits, grossing (no pun intended) $164m combined. Considering that more than 80 percent of the previous films’ box office came from domestic engagements, any acknowledgment from international audiences will merely be gravy for a franchise that can also count on strong future DVD sales.

Following the loose, short-sketch format of Jackass: The Movie and Jackass: Number Two, the new film moves between dangerous stunts performed by the cast and staged pranks inflicted on innocent bystanders (or on each other). Those who have memorised the hilarious, sometimes nauseating bits from the earlier films will recognise some familiar routines – including Knoxville dressed up as a crude senior citizen – but newbies should have no problem jumping right in to the mayhem, a commercial selling point that’s rare among film franchises.

As with their earlier films, Jackass 3D doesn’t have much sense of momentum, as its bits-and-pieces structure creates inevitable lags when certain gags or stunts fail to impress. But because each sequence is relatively short, no duff setup lasts long enough to overstay its welcome. And holding the proceedings together is Knoxville, a charismatic, photogenic daredevil whose contagious laugh is often as funny as whatever horrible physical pain has just been exacted on his body or those of his guffawing cronies.