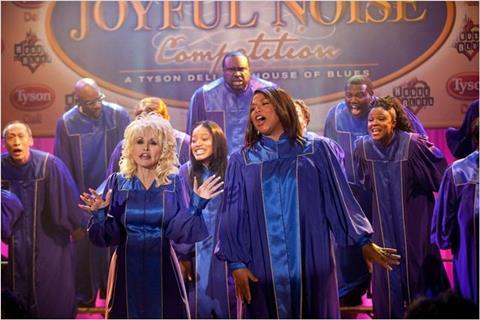 An unwieldy, frequently baffling piece of claptrap that careens wildly to and fro in its efforts to serve many different narrative masters, gospel-tinged Joyful Noise aims for many different marks, and misses on almost all of them. By turns a musical competition drama, a blue-collar homily, a forbidden coming-of-age romance and a tale of familial reconciliation, the movie tries to use noisy, open-hearted effort to mask its narrative deficiencies, but it comes across as phony — a duet of prefabricated sentimentality and self-satisfied impudence.

The performances of Latifah and Parton are things of volume and homespun sass.

When G.G.’s grandson Randy (Jeremy Jordan), vaguely defined as a “bad boy,” returns to town, he’s instantly drawn to Vi’s 16-year-old daughter, Olivia (Keke Palmer), and the feeling isn’t entirely unrequited. Randy also helps draw Vi’s Asperger’s Syndrome-stricken son Walter (Dexter Darden) out of his shell a bit, and enliven some of the group’s stuffy traditional arrangements. Vi doesn’t much like Randy’s ideas, or his interest in her daughter, but burying the hatchet with G.G. may be the key to bringing everyone together and finally winning the recognition they deserve.

Graff’s last film, 2009’s well received Bandslam, was also musically inclined. And while it’s true that some of the movie’s musical numbers soar — in particular a version of “Man in the Mirror,” a song made famous by Michael Jackson — Joyful Noise almost willfully resists concentrating on what it does best. When the Divinity choir heads to the regional competition, the audience doesn’t even see or hear them perform. They later qualify for the national finals in Los Angeles only after another group is disqualified, which seems an awfully strange manner to celebrate plucky underdogs.

Graff is seemingly more interested in trying to plumb the social networks the choir provides, but he does this in superficial ways. The movie’s many subplots come off as strange, unsatisfying, or both. One choir member brands herself an unlucky man-killer after bedding a colleague who has a heart attack and dies — a scene that brings the movie to a screeching halt.

The teen romance is also unconvincing, seemingly foisted upon the narrative for convenience’s sake. And Graff additionally never persuasively gets at the root of the conflict between Vi and G.G., whose relationship veers wildly from rancor and hostility (albeit campily portrayed) to begrudging respect, depending on what the moment requires. Given that they’ve each been members of this choir for so long, theoretically there should be a rich interpersonal history from which to draw, but the film bungles any legitimate exploration of female competitiveness.

In short, these aren’t characters, they’re vessels for wan moralizing and snappy if tired rejoinders, even if the movie attempts to cannily exploit economic hard times with a litany of made-for-TV-movie-type mini-catharses. Ladled across all of the hokum is a bunch of convoluted, cornpone metaphors. Exactly one scene, in which Vi finally rips into Olivia, emanates something approaching honesty.

Palmer and Jordan have a certain believable youthful innocence to them, but the performances of Latifah and Parton are things of volume and homespun sass.

Special note should go to hairstylist Cheryl Riddle, though, who creates a mesmerizing special effect and the movie’s most lasting reminiscence in the form of Parton’s towering, teased-upwards hairdo.