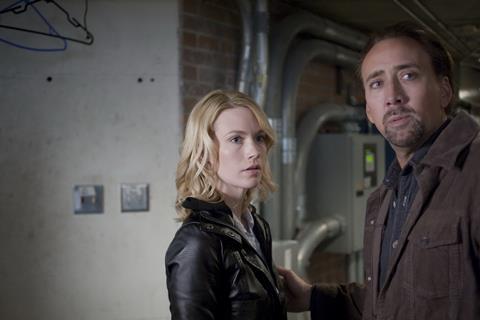 Nicolas Cage toys with vigilante/action man mode in the straightforward crime thriller Justice, but eventually settles for ‘ordinary man caught up in terrible events’ as the New Orleans set film dwells on the lengths a man will go to when seeking vengeance. Tough thrills should have been on the cards, but the film eventually settles for by-the-numbers action.

Cage – sporting a goatee to reinforce his teacher/everyman persona – invests his character with his signature seriousness and is at his best in the climatic action scenes.

Justice has already been released in Italy and opens in the UK on November 18, with no US release date is in place yet, though the casting of Cage and Man Men star January Jones suggests it is only a matter of time. Though its credentials are pretty sound, Justice (original US title was Seeking Justice) fails to set the screen alight, and a home entertainment life could be its best source of success.

The last time Cage shot in New Orleans it was for Werner Herzog’s more challenging and freewheeling Bad Lieutenant, but Justice is a much more straight forward fare. Cage plays Will Gerard, a well-meaning teacher at a tough urban school who has a content life with his musician wife Laura (January Jones). Their content life is torn apart when Laura is beaten and brutally raped.

At the hospital, Will is approached by Simon (played by a shaven-headed Guy Pearce) who says he represents a mysterious network that claims to be able to find who raped Laura and take revenge. Will decides to accept the organistion’s help…though is told by Simon that one day the group will come to him and ask him to help them.

Initially he is just asked to watch over a women and her children, but when Simon comes calling again it is to ask Will to kill a man the organisation claims is evil. Will starts to rebel, and when he and Laura are threatened he is drawn deeper into a dark conspiracy and has to go on the run as he is framed for murder and his life threatened.

Director Roger Donaldson (who made No Way Out) is an experienced filmmaker, and while pretty good use is made of post Karina New Orleans, there is a niggling sense that greater complexities and nuances would have helped the film (it is all pretty obvious and by-the-numbers), though perhaps certain elements have been lost in the editing process.

Cage – sporting a goatee to reinforce his teacher/everyman persona – invests his character with his signature seriousness and is at his best in the climatic action scenes when Will has to figure out the truth behind the organisation while also dodging police and killers. January Jones joins a long list of actors who badly fake playing the cello (think Maryam d’Abo in The Living Daylights or Susan Sarandon in The Witches Of Eastwick), and though her character goes through a terrible ordeal she is actually given little to do apart from a little clichéd running from the bad guy in the final scenes.

Guy Peace is just there to be evil - a role that makes no real use of his considerable his abilities somewhat - while the likes of Xander Berkeley and Jennifer Carpenter (from TV series Dexter) are wasted in poorly written roles. The whole vigilante plot could have been provocative and intriguing, but the film opts for heading into unconvincing wholesale conspiracy territory and never quite works out its stance.