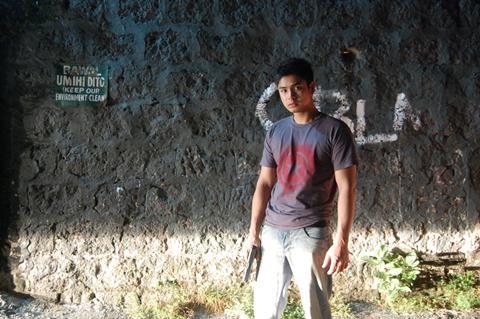 Showing the kidnap, beating, humiliation, rape, murder and dismemberment of a young prostitute, Brillante Mendoza’s new film Kinatay (which means “butchered” in Tagalog) is a nerve-shredding exploration of crime which is both repellent and grimly compelling. Offering audiences no relief or redemption, it is perhaps most notable for its daring in attempting to capture the moment a young man crosses the line into irrevocable evil.

Well-made by Mendoza and more coherent than last year’s Serbis, it will nevertheless be hard for even the most adventurous arthouse audiences to stomach. Somewhere in the indie shocker niche occupied by Irreversible or Henry: Portrait Of A Serial Killer, Kinatay should win a small following on the festival circuit and sales to edgy distributors who specialize in handling tough movies. Distribution opportunities in some territories will be hampered by the extreme nature of the material.

As in Serbis, Mendoza devotes much of his energy to setting the scene in the teeming, frenetic city of Manila. Establishing sequences show the squalor in which the 20 year-old protagonist Peping (Martin) lives with his young fiancée Cecille (Cabral) and their seven month-old baby. The film opens as the two get the bus to their wedding in front of a judge and celebrate with their family.

Peping is a student in the police academy but in order to make some money on the side for his family, he helps collect payments for a local drug ring. One night, while Cecille and child are at home, he is summoned by his liaison in the gang Abyong (Hilario) to come join them on an “operation.”

He gets on board a van with the boss of the gang, Abyong and other thugs including the brutish Sarge (Regala) and Vic (Diaz) unaware of what they are about to do. The van stops outside a hostess club and they pick up a beautiful prostitute called Madonna (Lopez) but the moment she gets into the car, Sarge and Vic beat her, gag her and force her to the floor.

Stunned in the back of the van, Peping watches in horror as they travel outside the city to a small secluded house where Madonna, who is in irredeemable debt for drug money to the chief, is taken to a cellar and the process of her hideous death begins at the hands of the psychotic troupe.

Mendoza’s deliberate pace which feels leisurely in the first 20 minutes of normality becomes tortuously effective as Peping makes the descent into horror and is faced with the terrifying dilemma of what to do. The audience, should it be willing to do so, makes the same descent and Mendoza asks his viewers to consider what they themselves would do in the same situation.The fact that the gang contains several senior police officers makes the circumstances even more excruciating and serves as a horrifying indictment of the corrupted life for millions of people in Manila.

Mendoza doesn’t shy away from showing the woman’s suffering nor how the men hack her body to pieces. Much of the night is in real time and he is determined to make his audience squirm in the same way as Peping. To that end, the cutting is appropriately jarring, the score by Teresa Barrozo unsettling.

Using handheld camera and close-up to discomfiting effect, the film is equally disturbing in its depiction of the complacency and mundane conversations of the seasoned killers while they commit the atrocities. Less subtle are the scenes of Peping’s rosy home life especially the film’s final scene which feels superfluous and obvious.