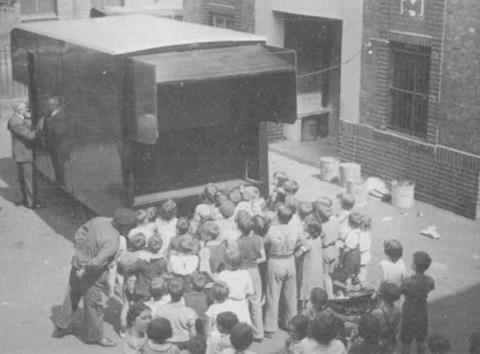 London’s film archives are to tour the city’s streets thanks to Film London’s KinoVan, a travelling cinema-in-a-van.

The KinoVan forms a key part of the three-year London: A Bigger Picture project, from London’s Screen Archives managed by Film London and funded by the Heritage Lottery Fund.

KinoVan is modelled on those used from the 1920s to 1950s by councils and government departments. It will tour 15 outer London boroughs, offering each one a bespoke programme of heritage films showing how life was lived in each area and how the city has changed over the years.

The aim is to engage residents with their local history and calls on Londoners to donate their own footage to build up a more comprehensive archive of London life on film.

Adrian Wootton, chief executive of Film London and the British Film Commission, commented: “Like a Tardis on wheels, we are effectively giving people the chance to time travel: to stand in front of the screen and see the past hundred years reel before their eyes. Selecting slices of vintage London life and taking them on tour is a wonderful way of unlocking the city’s past and encouraging the residents of today to engage with the history of our city and its people.”

Over the course of three years, the KinoVan will tour schools, fetes, supermarkets and community events, with an ambition to screen archive films to 100,000 Londoners. Footage includes drills performed by the Merton and Morden Auxiliary Fire Service circa 1939-1941 and festive scenes of a frozen Trafalgar Square.

The KinoVan’s next destination will be the Morden Christmas lights switch-on this Friday (Dec 5), 4pm-7pm outside the Merton Council Offices. For more information, visit Film London’s website.