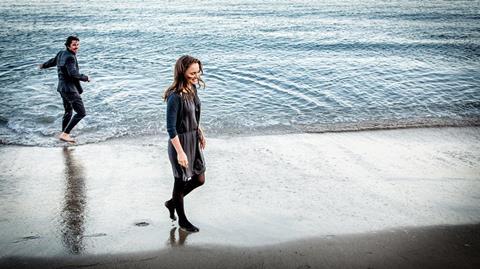 A tormented hero searching for meaning in life, accompanied by a meandering voiceover, beautiful visuals and more than a hint of existential crisis and pondering of one’s place in the universe. Yes indeed – welcome to that now familiar refrain of a Terence Malick film, and this time one grounded in that most surreal of real worlds, a chunk of Santa Monica peopled by movie stars, models and other members of the ‘beautiful’ Hollywood elite.

Thin, beautiful and often sporting wispy and expensively elegant clothes the women here are less formal personalities than chapter breaks to push on this ‘Knight’ and his search for spiritual fulfillment.

It is an elegant and strikingly shot film that revels in a series of wonderfully shot locations – from beaches to deserts and from hedonistic parties through to intimate encounters – and will likely enrapture fans of Malick’s very individual style. An inordinately good-looking cast, most of whom are dressed in the coolest of designer duds, will help marketing impact, and while this time round the story is pretty easy to follow, it may annoy some with its rather casual sexism (no chance to film a perfectly formed female derriere is missed here).

The title Knight Of Cups comes from the character in a tarot pack of cards and from – in the film at least – a Chaucerian style story about a young prince whose father had sent him to find a pearl, but who had been distracted in his quest, forgotten who he was and what he was searching for, and fallen into a deep sleep.

The prince here is Armani-suited Hollywood comedy screenwriter Rick (Christian Bale) – though he doesn’t seem a guy blessed with a capacity for laughs – who longs for something, without knowing quite what it is or how to try and find it, and despite wealth, looks and success doesn’t quite know which way to turn. The Knight of Cups is an artist, a romantic and an adventurer, but also a tormented soul searching for meaning.

Perhaps Santa Monica is the wrong place for a search for meaning, but this Knight finds solace, distraction and hints about how he should and could embark on a new direction in his encounters with a series of beautiful women. These loving and loyal women include flighty Della (Imogen Poots); doctor Nancy (Cate Blanchett), who he was once married to; mannered model Helen (Freida Pinto); married woman Elizabeth (Natalie Portman); stripper Karen (Teresa Palmer) and Isabel (Isabel Lucas) a young woman who may ultimately show him the way.

His quest for spiritual – and presumably sexual – enlightenment is juxtaposed by scenes with dwell on his troubled relationship with his father (Brian Dennehy) and brother (Wes Bentley), with all three of them haunted by the memory of the death of other brother Billy.

In a new familiar style from many of his previous films, Malick’s camera glides around the haunted hero, with scenes intercut with striking visuals – ranging from shots of the Earth from space and desert mountain ranges through to (very amusing and engaging) underwater shots in a swimming pool of a dog jumping in and searching for a ball – and set alongside an internal monologue by Rick. Bale’s Rick has very little actual dialogue – much of what passes for script happens in the background to the images – and while a largely un-smiling Bale gives the film a serious edge, it is the women in his life who offer life, personality and the hope of direction.

Thin, beautiful and often sporting wispy and expensively elegant clothes the women here are less formal personalities than chapter breaks to push on this ‘Knight’ and his search for spiritual fulfillment. There is a niggling notion that they are often shot for sex appeal, which is a shame. It is a bold and ambitious film – some may say pretentious – packed with striking visual moments (cinematographer Emmanuel Lubezki at his very best here) that shows Los Angeles – and Santa Monica in particular – off to great effect.

There is also plenty of jumping into swimming pools and/or the ocean fully garbed. Perhaps Armani is coming up with a new waterproof suit that needs to be promoted…