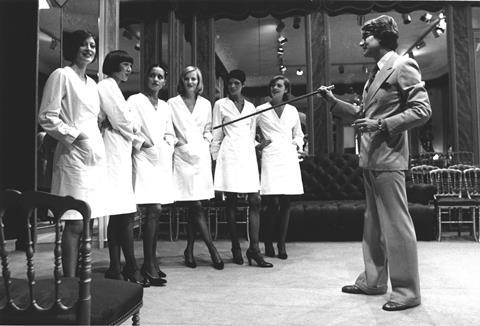 Sensitive and tortured soul Yves Saint Laurent and clear-eyed businessman Pierre Bergé  met at Christian Dior’s funeral in 1957 and moved in together soon after, embarking on a symbiotic 5 decade long relationship that pretty much lasted until YSL’s death in 2008. Pierre Thoretton’sL’Amour Fou is the moving and informative story of Saint Laurent and Bergé’s love for each other and for beautiful things - tens of millions of dollars worth of beautiful things, most of which were dispersed via a breathtakingly momentous Christie’s auction, preparation for which provides the excuse to revisit the power couple’s creative partnership.

YSL has been fortunate in the doc-makers who have chronicled his achievements.

One needn’t care about fashion to enjoy this elegantly constructed look back at half a century of trail-blazing as described by a lucid survivor who was there for every moment.  Interestingly, Bergé’s name has been dropped from the official international title of the Toronto-and-San Sebastian-bound September 22 French release called Yves Saint Laurent - Pierre Bergé - L’Amour fou. (If viewers don’t know what a Pierre Bergé is when they enter the theatre they certainly will by the time they leave). Bergé held forth in six interview sessions spread over four months and the director plucked the cream of 100,000 still photos and hours of vintage footage, augmented by his own thoughtful images to arrive at a dense, classy joint portrait.

That said, this doc may be too “European” in its sensibilities, neglecting to identify some key talking heads on the theory that “everybody” will recognise them. And there’s no doubt that Bergé had an active hand in how things are presented, but the man has excellent taste and refrains from painting YSL as a saint. Films Distribution sold multiple territories at Cannes.

Following clever opening credits, flash bulbs pop as Yves Saint Laurent, exuding his trademark melancholy, announces to the press that he is ending his career in haute couture: “I’ve decided to say farewell to the metier I’ve so loved.” Cut to Bergé delivering a lovely eulogy a few years later at YSL’s star-studded funeral (President Sarkozy and his ex-fashion-model wife, Carla Bruni are seen in the front row). The implication is that haute couture died twice.

Bergé says he doesn’t believe in the concept of souls: “Not my own, not these objects” and so has chosen to disperse the valuable wonders he collected in tandem with Yves and turn them over to “the undertakers of art” to raise money for their charitable foundation and AIDS research.  Skilled technicians pack up the paintings, sculptures and objets d’art and Thoretton’s camera films the forlorn bare spots left behind on the walls.

YSL was only 21 when he took over the House of Dior and started to revolutionize women’s clothing. When Yves was fired from Dior, Bergé found an American investor and the two lovers, flying by the seats of their bespoke trousers, opened what would become an empire on January 29, 1962.

Interviews, archival illustrations and borderline pompous looks at their various magnificent homes flow together like a nicely draped piece of fabric with perfect accessories. Saint Laurent, who was precocious and dutiful for much of his life, discovered drink and drugs in 1975 and indulged in both so heavily that his health was permanently compromised.  It is both sad and funny when Bergé describes the handful of times he left Yves - moving to four-star hotels just a few blocks away  from their splendid Paris home. “I only saw him happy twice a year, “says Bergé. “At the end of each collection when he was acclaimed by the room.”

Bergé admits that fashion design “is a horrible calling because it requires you to present your collection on a specific date.”  The controversy surrounding the launch of Opium perfume seems oddly quaint at this remove.

YSL has been fortunate in the doc-makers who have chronicled his achievements.  David Teboul filmed his last collection, resulting in two complementary 2002 docs, the excellent Yves Saint Laurent - Time Regained and Yves Saint Laurent 5, Avenue Marceau 75116 Paris. Bergé, who shows a rare flash of anger when noting how the fashion world changed in the 1990s and fell into the hands of vulgar merchants, says that Saint Laurent was a genius who “understood his era perfectly - and didn’t care for it one bit.”

It is a measure of the film’s effectiveness that YSL’s mark on the 20th century seems indisputable and that his loss is felt even for those of us who never met the man.