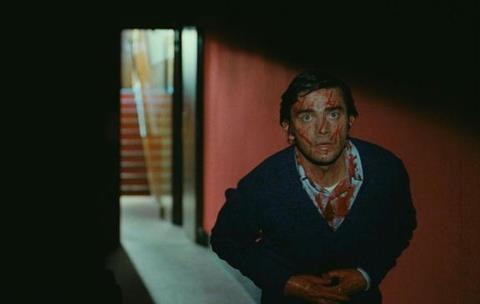 Exclusively targeting festival audiences, Last Screening (Derniere Séance) is a humourless little slasher that may cause some critics to sharpen their pencils and start digging into their semiotic lexicons, but will draw little attention in any other quarters. An anonymous cast, helped somewhere along the way, by the guest appearance of French film critic and historian Noel Simsolo, makes no attempt at real acting and its fascination with all the great female screen stars in history can hardly qualify as anything else but pretentious artistic show-off. Neither scary nor engrossing, it is just unnecessarily repetitive.

Pascal Cervo’s inexpressive performance in the leading role does not generate empathy or fear.

Set in a small cinema du quartier going out of business, the plot fashioned by Laurent Achard and Frederique Moreau features a deadpan projectionist-programmer-cashier, Sylvain (Pascal Cervo) who, once he closes down the Empire cinema for the night, goes out to indulge in murderous expeditions around town, picking up single women and cutting off their ears.

The reasons for it will be ploddingly revealed in a series of melodramatic flashbacks suggesting a mother fixation combined with an inordinate affection for movies in general and for Jean Renoir’s French Cancan in particular. For anyone who might miss early pointers, the script repeats its intentions several times, refers to an amateur theatre production of Phedre and insists on the portrait of an obsessive mother (therefore plenty of Jane Crawford stills hanging on the wall) who wants but fails to have her son become a child star.

Not really a film noir though it takes places mostly at night, nor a psychological drama because its mother fixation motives are too painfully obvious, and neither a thriller of any sort this could possibly be considered a bloody protest against the attempts to kill cinema as such, signified by Sylvain’s stubborn denial of his landlord’s intention to sell the Empire and turn it into a commercial surface.  Though, if this is the intention, it is worth mentioning there are more ways to harm the movies than just closing down one cinema.

Pascal Cervo’s inexpressive performance in the leading role does not generate empathy or fear, his mechanical actions could go on forever since no one appears to pay attention to  the trail of bodies he leaves behind and the victims he picks at random are treated like objects that happen to cross his way. The use of Renoir’s classic, which claimed that the result of an artistic effort is more important than the individual persons involved in it, is certainly not accidental, but as tributes go, French Cancan deserves a more affectionate one.