Looper jumps to number one at the UK box office 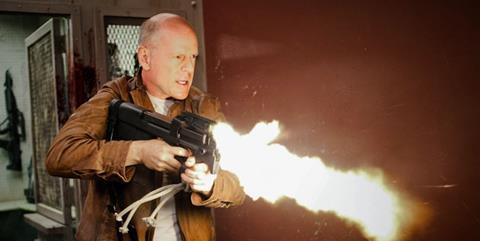 Following in The Sweeney’s footsteps two weeks ago, Looper has achieved eOne’s eighth number one in the UK.

Rian Johnson’s critically acclaimed sci-fi recorded an excellent $3.9m (£2.4m) opening bow from its 449 sites, taking over double its nearest competitor in the form of last week’s champion, Universal’s ParaNorman. Given the limited releases of Johnson’s previous two films (Brick and The Brothers Bloom), Looper is already his best-ever performance in the UK.

Its UK success adds to a fine worldwide opening weekend for the sci-fi, which opened Toronto last month, including a strong $21.2m debut in the US.

Despite dropping a place to second, Universal’s ParaNorman notched a third straight £1m-plus weekend to hold off the rest of the week’s new challengers.

The second animation for Laika studios took $1.8m (£1.1m) for $7m (£4.3m) after three weeks in play, still behind Coraline at the respective stage in its run ($8m/£5m) but ParaNorman is recording sturdier holds than Coraline so could still catch up.

Lacking bite despite being the week’s second highest new entry, Resident Evil: Retribution is on course to be the series’ lowest-ever opening in the UK.

Figures for Entertainment’s Killing Them Softly were unavailable at the time of writing.

This week sees saturation releases for eOne’s The Perks Of Being A Wallflower (opens Oct 3), Momentum’s Sinister and Fox’s Taken 2 (opens Oct 4). Element’s What Richard Did receives a regional release in Ireland, while The Works’ The Knot and Picturehouse/Revolver’s Liberal Arts both receive wide releases.