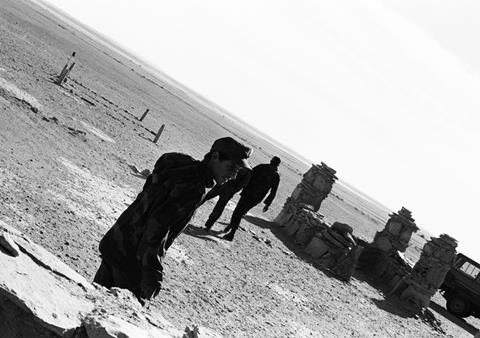 Lost Land (Territoire Perdu) is an artistically engaging presentation of the intractable issues of the Western Sahara. Drained of colour, still and flickering, demanding of its audience, it is a festival sidebar and museum piece, a social document which listens to the words of the Sahrawi nomads, for whom normal life stopped in 1976 after the Spanish withdrew leaving chaos in their wake.

Lost Land observes in bleached stillness as the winds and sands of the Sahara reveal slowly the bleak lives of these forgotten, unforgetting people.

Engaged in an endless war of attrition with Morocco, which has divided the Western Sahara in two with a giant wall, the Sahrawi wait for their future as they remember their past. Some live in occupied territory, some in free Sahara, and over 160,000 are in limbo in Algerian refugee camps.

They recall death, protest and torture; sporadic, almost lazy gunfire rings out across the El Hisam wall and provides an intermittently eerie soundtrack to Lost Land.
Pierre-Yves Vandeweerd’s camera, shooting in grainy Super 8 - mostly black-and-white, with the odd insert of Kodak colour - observes in bleached stillness as the winds and sands of the Sahara reveal slowly the bleak lives of these forgotten, unforgetting people.

The film is introduced by lines from Herodotus which deal with a noble breed of camels which lives in this western part of the Sahara; these animals are the bookends to the 75-minute film which strangely resembles newsreel footage from an early, silent age; not just a lost land, but an otherworld.

Vandeweerd slices his slim film into chapters entitled The Camps, The Wall, People of the Void, etc, but does little to explain the complicated politics of this region. We are made aware that Moroccan forces invaded and the Sahrawi have been exiled ever since, or left behind to be persecuted in their own towns.

Wrapped almost fully in their headscarves, these nomads wait out their sentence of exile as the flies swarm.

Slowly, across the desert, soldiers reveal themselves on the El Hisam wall. A voiceover lists the names of abductees and disappeared people. Lost Land seems, at one point and by their testament, to have settled itself in the past until soldiers march across this inhospitable terrain, reminding us that the struggle continues today.

All the time the camera inches closer to the El Hisam wall, as telephone recordings reveal everyday torture and brutality for the citizens who didn’t flee to the camps all those years ago.

The film builds up to long, long, silent shots. There is no soundtrack, past the wind, the radio, and finally some notes, which rise with the lowing of the camels to present an anguished lament that fills the screen.