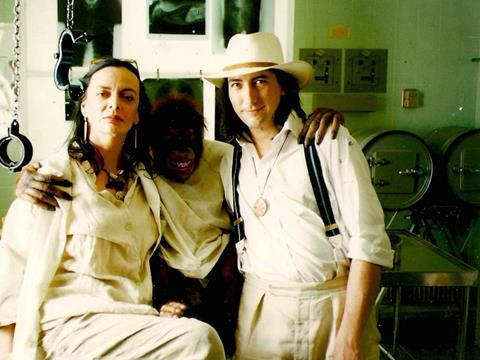 In 1996, writer-director Richard Stanley had the beginnings of a cult reputation for the science fiction film Hardware but had gone into debt arguing with Palace Pictures over his second film, the Namibia-shot Dust Devil.

An array of producers, including Pressman and New Line head Robert Shaye (who wasn’t that keen on the project in the first place), pipe up with their own wry, amused takes on what went wrong.

Then, his on-spec script adaptation of H.G. Wells’ twice-filmed novel The Island Of Dr Moreau was picked up by producer Edward R. Pressman and set to be made in a remote region of Australia for New Line Pictures.  Stanley’s idea for a medium-budget film starring Jurgen Prochnow was set aside when Marlon Brando expressed an interest in playing Moreau, and Bruce Willis and James Woods were attached.  When Willis pulled out because his divorce case prohibited him from spending six months on an island location, Val Kilmer became the washed-ashore leading man.

He demanded a reduced schedule that Stanley solved by switching him to the role of Moreau’s eccentric assistant, bumping Woods out and making room for Rob Morrow as a new castaway.  In the event, after four weather-blighted shooting days, Stanley was fired and replaced by veteran John Frankenheimer … Morrow also got off the hook and David Thewlis wound up with his role.

Given that the accepted version of this story is that Stanley’s ideas were too weird and dangerous for New Line, the revelation of David Gregory’s Lost Soul the truly strange elements of the finished film arose after the visionary was replaced by a professional and the egos of Kilmer and Brando really let loose.

This entertaining, gossipy, compulsive documentary follows the slow trainwreck from all angles.  Frankenheimer and Brando have since died and a few participants (Thewlis and New Line producer Michael DeLuca) are absent; Kilmer doesn’t appear, perhaps remembering Frankenheimer’s ‘even if I were shooting The Val Kilmer Story, I wouldn’t cast Val Kilmer’ comment.

The well-known anecdote of the exiled director returning under a beast mask to be an extra on what had once been his film is retold and slightly demythologised, and Stanley is surprisingly cheerful about the experience which derailed his mainstream career.  Among the interviewees are beast actors – Fairuza Balk (who remains unhappy about being contractually obliged to stay on the film), Marco Hofschneider (whose key role was reduced to make room for Brando’s pet, the tiny Dominican actor Nelson de la Rosa), Fiona Mahl (who played the multi-breasted pig woman) – and a still-appalled Morrow.

An array of producers, including Pressman and New Line head Robert Shaye (who wasn’t that keen on the project in the first place), pipe up with their own wry, amused takes on what went wrong, as do production artist Graham Humphreys and Frankenheimer’s 2nd unit director James Sbardellari. The film had its premiere at London’s FrightFest.

Thanks to the disruptive presence of Brando, who insisted on white kabuki make-up and wearing an ice bucket on his head, and the troubled tropical locale, there’s an obvious parallel with Hearts Of Darkness, though Gregory only has snippets of home movies, mostly of make-up tests or beast players partying, and minimal extracts from the film to illustrate the interview material. The lesson is that sometimes shenanigans like this lead to Apocalypse Now, but more often you get the 1996 Island Of Dr Moreau.