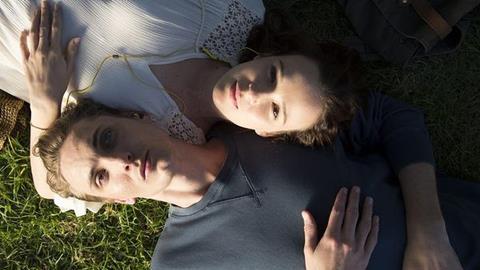 There are plot twists and then there are supertwists. Love Is Now is a bittersweet romantic drama with the kind of supertwist (such as in The Sixth Sense) that throws pretty much everything that has gone before into doubt and confusion. That’s fine, but feature debut director/writer Jim Lounsbury leaves his big revelation very late, well after plot and character inconsistencies have become irritatingly troublesome.

It’s a very handsome widescreen movie with attractive performances, and made at commendable speed (only 23 weeks from greenlight to cinemas) with the backing of — among other private investors — Hoyts, Universal and Nikon.

Shot entirely on the new D810 DSLR, the movie’s partnership with Nikon is effective, if blatant. Protagonists Dean and Audrey are both photographers, she more focussed on worthwhile subject matter than he, and both proudly carry their Nikons.

They fall in love at a Sydney photograph exhibition and she convinces him to accompany her on a lengthy cycling and photography trip along ‘The Harvest Trail’, earning bed and board by fruitpicking as they go. She had attempted it two years before but had met with an accident before attaining the object of her trip: to watch daybreak from the top of spectacular Mount Warning.

Audrey (Claire Van Der Boom) is emotionally attached to a leather-bound journal in which she writes her thoughts and draws accompanying illustrations. Dean (Eamon Farren), gormless, unsophisticated and increasingly unwell, tries hard not to sneak a look at the journal while dealing with people they meet on journey, including Audrey’s former boyfriend James (Dustin Clare) and Becca (Rainee Lyleson), a keenly available orange picker.

The problems are with the screenplay. The central narrative is slow to get started and the Dean/Audrey relationship is maddeningly unclear. Of course they are both keeping secrets, and there’s that giant secret kept far too late up Jim Lounsbury’s authorial sleeve.