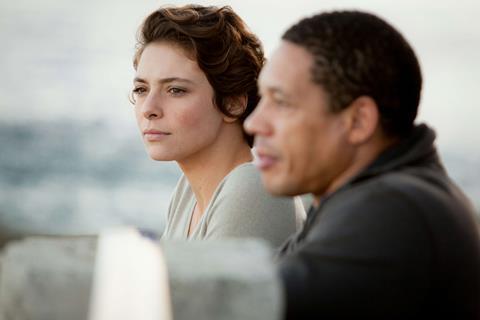 Lush, lingering and moodily melodramatic, Emmanuel Mouret’s new film Lovers (Une autre vie) is an astonishingly bland bit of silly soap opera, littered with poor staging, languid (supposedly meaningful) pauses and wasted opportunities. A strong cast take it all very seriously – and there is no denying that the backdrops are very lovely – but it will only appeal lovers of maudlin and clichéd romantic fiction.

This is a film that has it all – car crashes, plenty of fainting, rushes to hospital, flash boats, wheelchairs and even nuns – as it bids to throw every romantic cliché into the pot and stir vigorously for good measure.

The film, which had its world premiere at the Locarno Film Festival, may be able to trade on the star names of Joey Starr and Virgine Ledoyen, while the South of France locations give it a real sense of atmosphere, but it is hard to see it appealing to the art house brigade who love French cinema. If the cast travel, other festivals may be an option.

Internationally famous pianist Aurore (Jasmine Trinca) collapses one night after a performance, exhausted from too many concerts. Mentally and physically exhausted from music she retreats to her house in the South of France, and there she meets Jean (Joey Starr), who has come to fit a security system in the house.

For some not entirely clear reason she falls for the rather dour Jean, and they start a desperately romantic affair and tentatively plan a life together. Jean plans to leave his long-time partner, the beautiful Dolorès (Virgine Ledoyen), but finds that her rival is determined not to let him go.

This is a film that has it all – car crashes, plenty of fainting, rushes to hospital, flash boats, wheelchairs and even nuns – as it bids to throw every romantic cliché into the pot and stir vigorously for good measure. There are more than a few laugh-out loud embarrassingly funny moments along the way, with the story entirely predictable at all times. Perhaps best of all (spoiler alert) is when Aurore is parked at a petrol station, and next to her comes and parks a truck with Jean’s smashed-up white van on board….I’m sorry…I laughed.

Actor/filmmaker Emmanuel Mouret, who has made finer films - such as 2009’s Shall We Kiss? (in which he starred with Virginie Ledoyen) - shoots with a good deal of style and gloss, but just layers in too much sentimental melodrama to make the film palatable. If, however, he was aiming for weepy old-fashioned romantic fiction, then he has come close to succeeding.