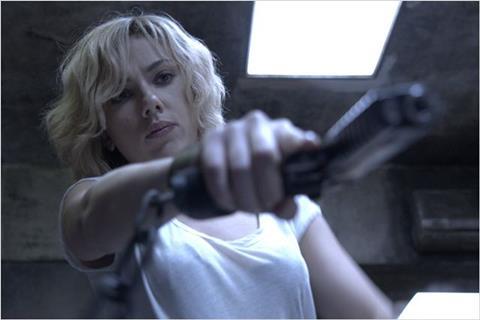 Winningly daffy, Lucy is writer-director Luc Besson’s best film since The Professional and perhaps his most ludicrous since then, too. (To be fair, 1997’s The Fifth Element is a close second in the latter category.) A nasty action-thriller that aspires to pop-philosophising about humanity’s potential for greatness, the film risks pretentiousness at every turn. And yet, Lucy is buoyed by its fleet execution as well as Besson’s commitment to the grandeur of his operatic pulp.

Johansson used her bewitching beauty similarly in Under The Skin: In both films, she’s such a striking, gorgeous presence that there’s almost something terrifying in her stillness.

None of this would matter, though, if it weren’t for Scarlett Johansson’s masterful performance as the titular heroine who unexpectedly becomes the world’s most intellectually evolved human, to her amazement and horror.

Universal will be releasing Lucy in the US on July 25, when it will square off with Hercules and holdovers The Purge: Anarchy and Dawn Of The Planet Of The Apes. (Looming the following weekend is Marvel’s Guardians Of The Galaxy.) Johansson’s star power will help this R-rated offering, although some audiences may be disappointed to discover that Lucy is a defiantly odd action-thriller that muses as much as it delivers high-octane set pieces. Still, solid genre numbers seem assured, with possibly good word-of-mouth assisting the overall box office numbers.

Set mostly in Taipei, the film stars Johansson as Lucy, whom we learn practically nothing about before she’s thrust into the centre of the action. Pressured by a sleazy ex-boyfriend, she delivers a locked briefcase to a ruthless gangster named Mr. Jang (Choi Min-Sik, underused but quietly menacing). He immediately recruits her to be one of his drug mules to smuggle the case’s contents, a bag of blue powder that has powerfully hallucinatory properties.

But when the bag bursts inside Lucy’s body, she suddenly develops superhuman mental powers that grow stronger by the hour. Her only hope for understanding what’s happened to her is journeying to Paris to meet Professor Norman (Morgan Freeman), a brilliant scientist who’s made his life’s work the study of the brain’s potential.

After establishing his name as a stylish thriller filmmaker with The Professional and La Femme Nikita, Besson has shifted to other genres (such as the biopic The Lady and the black comedy The Family) and writing and producing projects he doesn’t direct (the Transporter and Taken franchises). Lucy has the same overblown swagger of his early-‘90s work — slow-motion suspense scenes scored to classical music always get the blood pumping — but this time around, he’s out for more than just escapist kicks.

Early in Lucy, we hear Lucy explain in voiceover that humanity has been around for millennia, still struggling to fully tap its capabilities. Soon after, Lucy’s harrowing adventure is intercut with scenes of Norman lecturing students about how much of our brains we don’t use, speculating what would be possible if we could unleash the full power of our minds, including controlling matter and becoming immeasurably intelligent.

These expository bits of dialogue aren’t merely hints at where the story is going but, also, a clue into the emotional and intellectual resonance Besson is seeking. On its surface, Lucy is a deceptively familiar, Hitchcock-ian tale of an innocent trapped in an increasingly dangerous scenario. But the Norman interludes, as well as flashbacks to the dawn of mankind somewhat reminiscent of the opening of 2001: A Space Odyssey, suggest that Besson wants to say something deeper about what it means to be human.

Never a particularly deep filmmaker, Besson doesn’t quite pull off his pontificating. (Essentially, his big idea is that, the closer we get to using all of our brain power, the more we’ll lose what gives us our soul.) But the stoned, dorm-room theorising goes down smoothly thanks to Lucy’s playfulness. Running less than 90 minutes, the film is a giddy sprint, Besson seemingly energised by his return to down-and-dirty genre filmmaking. (Lucy isn’t as campy and gleefully amoral as The Professional, but it flirts with that territory.) Julien Rey’s editing and Eric Serra’s score are on point, juicing the film headlong into its next sequence as Lucy evades her pursuers and, later, begins to flex her new mental powers.

Recently, Johansson has ably demonstrated her talent for moving between mainstream fare (Captain America: The Winter Soldier) and art-house projects (Under The Skin, Her). Oddly, Lucy is a beguiling mix of the two: Although certainly targeting the multiplexes, the film nonetheless gives her room to develop a character that’s more nuanced than what’s seen in the typical summer popcorn flick.

Because we learn little about Lucy at the start, part of Lucy’s enjoyment comes from trying to deduce precisely who this young woman was before her life was put in peril. Without overdoing it, Johansson hints at Lucy’s wayward behaviour before the film began, which makes her gradual intellectual evolution both disturbing and funny: She’s a regular person who’s suddenly a telekinetic genius and superhero, although those gifts may end up killing her.

The actress harnesses her stunning looks to great effect — first to create empathy for the terrified Lucy who’s at the mercy of Mr. Jang and then, later, to highlight the inexplicable transformation that’s occurring within her once the drug takes hold. (Johansson used her bewitching beauty similarly in Under The Skin: In both films, she’s such a striking, gorgeous presence that there’s almost something terrifying in her stillness.) She doesn’t so much justify Besson’s philosophical wandering as she sidesteps his ponderousness to create real urgency for Lucy’s dilemma.

It’s not easy to be the calm, human centre of a movie this preposterous. (Her mental powers sometimes feel rather arbitrary, and Besson’s stabs at making big statements, though occasionally disarming, can be awfully awkward.) But Johansson keeps Lucy grounded, bringing Besson back down to earth whenever he threatens to go off on another one of his loony musings.