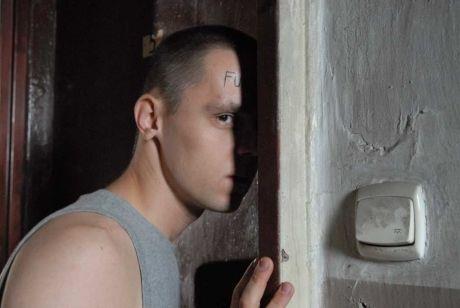 The gritty and brutal Made in Poland is an angry statement of radicalism that impresses more with its frantic shooting style and and jagged imagery rather than its rather naïve and simplistic content. The fact that this is no ‘safe’ film may make it intriguing to certain festivals, though any real distribution life will be minimal.

Made in Poland sometimes makes for uncomfortable viewing, but its sheer sense of anger is admirable at times.

Shot using saturated colours and abrupt tone contrasts, it follows 17-year-old former altar boy Boguś Kowalski (Piotr Wawer Jr) who wakes up one day and realises that everything one would like to say to the world is expressed by the words “fuck off”, so he promptly tattoos the words on his forehead.

He sets about smashing phone boxes and card, but this just leads him into trouble with local gangsters whose car he damages, and he demand he pay for repairs…or else. The fact that he and the gang boss share similar musical tastes in their love of singer Krzysztof Krawczyk puts the beatings on hold for a while, but the threat still stands.

He asks “respected authorities” for help, approaching his mother, a priest and his former Polish teacher but they can’t really help. Shaven-headed Boguś is also confronted by his siblings, Monika and Emil who are fascinated by their brother’s radicalism and try and help, and through Monika’s affection he gradually begins to feel something other  than fury for the first time.

Made in Poland sometimes makes for uncomfortable viewing, but its sheer sense of anger is admirable at times, and the performances range nicely from the intense through to the ironic and amusing.