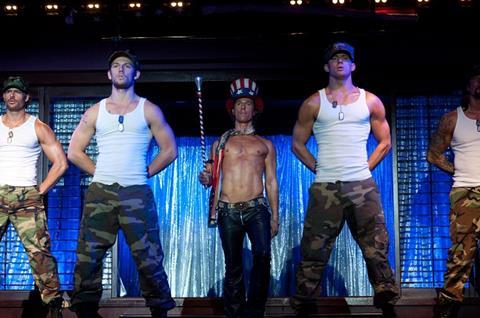 With a milieu that’s more entertaining than its story, Steven Soderbergh’s Magic Mike casts Channing Tatum somewhat against type as a male stripper with entrepreneurial ambitions. The raunchy setting will certainly get the film noticed but it’s doubtful that Tatum fans will turn out in their usual numbers for this rambling, mildly edgy comedy drama.

Soderbergh gives the film a distinctive look and an almost verité feel that produces some effective sequences over the story’s early stages.

After getting its premiere on the closing night of last week’s Los Angeles Film Festival, the film opens wide in North American through Warner on June 29 and later this summer through independent distributors in international markets. Box office prospects are probably better than they usually are for Soderbergh’s more experimental projects but not up to the level associated with Tatum’s mainstream action outings and romances.

Tatum’s Mike is the thirty-year-old star of the Kings of Tampa, a Florida troupe run by stripper turned club owner Dallas (nicely played by Matthew McConaughey). When Mike brings 19-year-old Adam (British up-and-comer Alex Pettyfer) into the troupe he meets Adam’s pretty but no nonsense sister Brooke (Cody Horn from Flipped). The romance that begins to develop makes Mike weigh the money and sex he gets from stripping against his plans to get a more sober business off the ground.

Written by Tatum’s producing partner Reid Carolin, the film plays comedic over its first half, with plenty of stripping routines and off-stage partying. The tone gets more serious as drugs enter the picture and complicate things for Mike, Adam and Brooke, but the story never really finds a dramatic focus.

Soderbergh gives the film a distinctive look and an almost verité feel that produces some effective sequences over the story’s early stages.

Tatum is solid but a little bland as Mike. Pettyfer’s performance has a bit more edge and McConaughey steals several scenes as the raucous yet hard-headed Dallas.