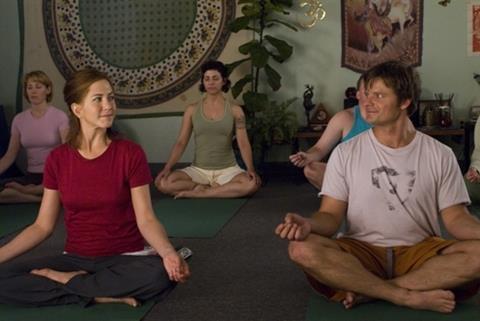 There is always an audience for a quirky, cutesy romantic comedy andManagementseems to fit the bill perfectly, at least for the first hour. A sudden lurch towards the preposterous at the two-thirds stage undoes a lot of the good will that has been accumulated up until that point. The film does manage to get back on track for a happy ending, but it feels like damaged goods after the changes in tone along the way. What started out feeling like a crowd-pleaser winds up offering only limited possibilities for a middling theatrical release.

Steve Zahn has always had charm to spare and his puppy-dog personality is well cast in the role of smalltown hotel night manager Mike. He is a decent guy going nowhere until saleswoman Sue (Jennifer Aniston) turns up as a guest. A wary Sue works hard to reject his awkward advances, but succumbs to a brief encounter. She heads back to her ordinary life without a backward glance. Ready to commit heart and soul to a relationship, Mike hops on a plane and follows her to Baltimore. He is threatening to become the laundryroom fling from hell, but there is something about him that begins to work its magic on Sue’s heart.

The first hour of Management is sweet and charming because it feels credible. An older-looking Aniston brings just the right vinegary edge to Sue; a woman with a kind heart and low self-esteem. Zahn is wide-eyed, bumbling and guileless. This is a couple that you want to see winding up in each other’s arms.

Things start to go off the rails with the introduction of Sue’s former boyfriend Django (Woody Harrelson) who now runs an organic yoghurt business. An ex-punk with a volatile temper, Django is the kind of obvious comic character that seems to belong to a much broader affair, especially once he starts spraying shotgun pellets and butting heads.

When Django offers Sue a proposition of marriage with a degree of wealth and security to go with it, Mike is obliged to become ultra-persistent in his pursuit of the woman he loves. This mostly leads to wacky comic developments that feel like like they belong to a more raucous, less sensitive film and jar badly with what has gone before. It is as if someone has let the air out of a balloon as the film slowly starts to deflate.

A return to the more serious consideration of whether Mike and Sue might have a future together helps to re-focus the film after some bumpy, tedious stretches. Zahn’s comic timing and irrepressible spirit make Mike a very sweet guy whilst Aniston brings an endearing tartness to Sue, making her sympathetic even as some of her decisions seem decidedly ill-advised.