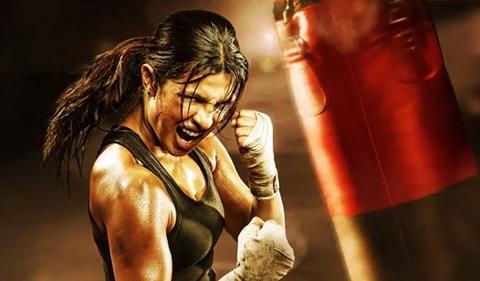 An Indian boxing drama that follows the sports-movie template a little too slavishly, Mary Kom has its share of likeable predictability, but this true story of a world champion female prizefighter gets bogged down in its emphasis on emotional overkill. Making his directorial debut, Omung Kumar seeks to do little more than send his audience on a rollercoaster of highs and lows, in the process losing the nuance of his main character whom, one suspects, was probably more interesting than this formulaic movie suggests.

Mary Kom can still be sufficiently rousing in its training and boxing scenes. Kumar is an art director, and he brings that talent to the film’s most music-video-like sequences, giving the viewer plenty of kinetic eye-candy.

Playing at the Toronto Film Festival before opening in India September 5, Mary Kom will be boosted by the presence of star Priyanka Chopra in the title role. And international audiences who may not be familiar with the particulars of Kom’s story could nonetheless be engaged by this underdog tale. (Anyone who’s seen a boxing movie will recognise Mary Kom’s Rocky­-like narrative contours.)

The film focuses on approximately eight years in the life of a young woman from Manipur named Chungneijang (Chopra). Although teased by some, she has loved boxing since childhood, and after meeting Singh (Sunil Thapa), a respected boxing coach who runs a popular gym, she is convinced that she wants to be a fighter. As she rises up the ranks and becomes a champion, she also finds love in the form of her long-time friend Onler (Darshan Kumaar), but Singh warns her that marriage will distract her from athletic glory.

As with many sports movies before it, Mary Kom dutifully charts the course of an unlikely dreamer who succeeds thanks to hard work, determination and a wise-but-gruff coach. (Singh gives Chungneijang the boxing name Mary Kom because it’s shorter.) To be fair, Kumar’s film does have its novel twists on the genre. (For instance, Mary’s struggle to reclaim her championship title after having twins and experiencing profound changes to her body are challenges no male athlete has to face.) But these potentially intriguing aspects to Mary’s story have been beaten down and reshaped until they all fit too smoothly into the programmatic narrative.

As a result, Mary Kom never really investigates the woman whose life gives the movie its name. Chopra has as easy-going presence, and she looks properly steely in the films’ numerous, overwrought training montages. (Mary Kom’s most egregiously overblown moment involves her being sad while standing outside in the midst of a random torrential downpour.) But Mary doesn’t have much definition beyond the fact that she’s a woman in a predominantly male sport. (Even this, though, isn’t very compelling considering that she’s soon able to box against other women.) Along the same lines, Mary Kom pays lip service to the fact that, because Mary is from Manipur, she’s not treated as an equal among other Indians, but there’s little pathos to this conflict.

Chopra’s co-stars are equally hamstrung playing characters who appear to have been plugged in as opposed to thought out. Thapa exudes cranky authority as Coach Singh, but he and his pupil exhibit little chemistry, which is a problem when Mary, after becoming a mother and turning her back on boxing, must convince him to coach her again. As Mary Kom portrays their relationship, Singh was deeply wounded by her decision to seek a more domestic life, but since we don’t get much of a sense of their dynamic, we also don’t grasp the betrayal he felt at her decision.

With that said, Mary Kom can still be sufficiently rousing in its training and boxing scenes. Kumar is an art director, and he brings that talent to the film’s most music-video-like sequences, giving the viewer plenty of kinetic eye-candy. (The all-caps Indian pop songs further juice these moments with euphoric energy.) But since these moments aren’t girded by emotional underpinnings, they feel diverting as opposed to gripping. Aspiring to be an inspirational sports film, Mary Kom is merely dully efficient: Its punches glance off.