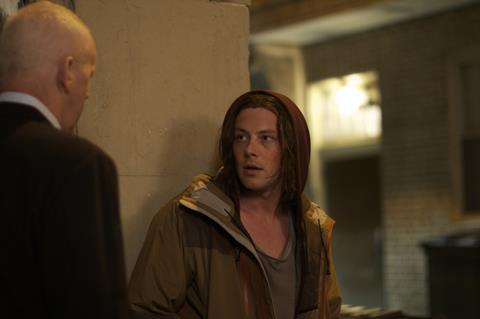 The untimely demise of Glee star Cory Monteith this summer at the age of 31 will bring attention to McCanick, one of his final films, but unfortunately that’s one of the few things that distinguishes this subpar character study and crime thriller. Led by a grizzled performance from David Morse as a tortured detective hunting down a recently released criminal for mysterious reasons, McCanick badly overestimates its ability to wring compelling drama from threadbare genre elements and an unsatisfying third act twist.

Monteith projects a certain enigmatic quality in his portrayal of Weeks, leading the audience to wonder why he went to jail and what makes McCanick despise him so.

McCanick has seen its profile rise due to Monteith’s fatal overdose, and fans of the television series Glee will no doubt be curious to get one of their last glimpses at the young actor’s work. But this rather ordinary crime film doesn’t boast much theatrical appeal beyond that fact, especially considering that Monteith is merely in a supporting role and that Morse, while a respected character actor, is not a marquee draw.

As the movie opens, tough-as-nails Philadelphia police detective Eugene McCanick (Morse) doesn’t seem to have much in his lonely life outside of his work. But he gets unexpectedly incensed when he learns that Simon Weeks (Monteith), a homeless streetwalker that he put away seven years ago has been released from prison early. Despite being warned by his boss (Ciarán Hinds) to steer clear of Weeks, McCanick drags along his young partner Floyd (Mike Vogel) to track down the criminal, while a series of flashbacks flesh out his true motives for finding Weeks.

Directed by Josh C. Waller, whose B-movie actioner Raze premiered at the Tribeca Film Festival earlier this year, McCanick from the outset hints unsubtly that the titular main character is a man haunted by past failings. Once McCanick discovers that Weeks has been freed, he pursues the young man with such a reckless fervour McCanick

that it’s obvious that it will only be a matter of time until some dark secret connected to Weeks will be revealed that shines a light on what has been eating away at this cop.

Veteran actor Morse (familiar from movies like The Green Mile and The Hurt Locker) imbues McCanick with a twitchy edge that suggests a passion for his work but also an emotional instability that could be his undoing.

Monteith projects a certain enigmatic quality in his portrayal of Weeks, leading the audience to wonder why he went to jail and what makes McCanick despise him so. To a degree, his understated performance is a feint to set us up for a late-reel twist in which we finally see what transpired between the two men. But like much of McCanick, this reveal is handled in a clumsy, uninspired way that robs the surprise of its potential emotional power.