Sony’s threequel debuts top, toppling The Dictator after just one week in power. 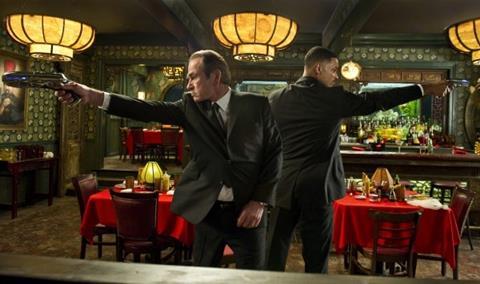 Sony’s threequel arrives ten years after its sequel, and the weekend result is some way down on the previous two instalments. The original Men In Black acheived the strongest at $11.1m (£7.1m), with the sequel not far behind on $9.7m (£6.2m), neither of which benefitted from the 3D boost.

How much the weather played a part will become clearer in the coming weeks, but it’s unlikely to challenge either of the previous instalments’ final hauls of which Men In Black takes the glory at an excellent $56.2m (£35.8m).

Continuing to attract the crowds after five weeks was Marvel/Disney’s superhero team-up The Avengers - Avengers Assemble in the UK - which charted third in the week that it became the fourth biggest film internationally of all time at $781.6m overall.

Arriving in fourth was another new entry in the form of Lionsgate’s What To Expect When You’re Expecting after the all-star romantic comedy took a solid $1.0m (£661,000) from its 410 sites.