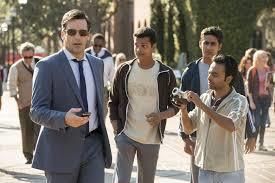 A feel-good sports drama whose every move seems lifted from an earlier, better film, Million Dollar Arm is so blandly genial that it barely leaves an impression. Based on the true story of a floundering American sports agent who decided to reignite his career by holding a competition to find the best pitcher in India, this Disney offering features acclaimed Mad Men star Jon Hamm in his first lead film role. But even his charm and sensitivity are no match for a story that’s told with button-pushing predictability.

Million Dollar Arm projects an inoffensive air, copying a familiar sports-drama narrative arc in which everything is building to one big final contest.

Set for release May 16 in the States, Million Dollar Arm will attempt to be the go-to choice for filmgoers uninterested in summer’s heavily promoted fare such as Godzilla, X-Men: Days Of Future Past and Neighbors. Audience familiarity with Hamm will help some, as will the movie’s timely arrival during baseball season. But strong word-of-mouth will be necessary to give Million Dollar Arm theatrical momentum, although Disney’s hopes to corral the family crowd may be dashed somewhat by the arrival of Blended a week later.

Directed by Craig Gillespie, whose previous work has included the quirky indie comedy Lars And The Real Girl and the horror remake Fright Night, Million Dollar Arm stars Hamm as JB Bernstein, a Los Angeles sports agent whose fledgling company is about ready to go under. Desperate to stay afloat financially, he hits upon the idea of creating a televised reality show where young men in India compete to win the chance to come to America to try out for Major League Baseball. But after finding his two pitching finalists, Dinesh and Rinku (Madhur Mittal and Suraj Sharma), and flying them to L.A., he realises that the culture clash may be too challenging for these impressionable young men who have never been away from their impoverished villages.

Though Million Dollar Arm has an undeniable sweetness, there’s a persistent phoniness to the script (written by Tom McCarthy) that leaves its twists and turns feeling manufactured rather than earned. Recalling the inner struggle that powered Jerry Maguire, another drama about a sports agent at a crossroads, Million Dollar Arm explores its main character’s difficulty balancing work and a fulfilling personal life. The problem is that JB simply isn’t dark or nuanced enough to be that interesting. As played by Hamm, the mildly self-centred character has relatively minor flaws. (He prefers bedding beautiful models to having a real relationship, and he sometimes puts his agency’s needs over the needs of his homesick Indian pitchers.) JB’s slight issues can be fixed with a few heartfelt third-act speeches; essentially, he’s a somewhat shallow guy who just needs to learn to be a bit nicer.

That dramatic timidity extends to the rest of the film. Although JB is supposedly in danger of losing his agency and his home, Million Dollar Arm doesn’t have particularly high stakes. (For a movie about characters from different walks of life coping with financial worries, Million Dollar Arm ultimately seems blasé about grim economic realities. Everything is shot with too much cheery gloss.) Likewise, Dinesh and Rinku’s difficulty in adjusting to L.A.’s fast-paced lifestyle never cuts very deeply or has much pathos: Mostly, we’re given fish-out-of-water glibness about the exoticness of escalators and elevators. (More irritating is the fact that their friend and interpreter Amit, played by Pitobash, is little more than the typical wacky-foreigner caricature.) Even JB’s burgeoning interest in the pretty medical student staying in his guesthouse (the appealing, witty Lake Bell) is played with a nagging cutesiness that waters down their clear chemistry.

Because Disney is aiming for the family crowd, Million Dollar Arm projects an inoffensive air, copying a familiar sports-drama narrative arc in which everything is building to one big final contest. Additionally, we’re beset with platitudes about playing for the enjoyment of the game and the importance of believing in oneself. (There are also myriad training montages.) A touching movie can be made from such shop-worn elements, but Gillespie and his likable cast (which includes Aasif Mandvi, a dependably weathered Bill Paxton, and Alan Arkin doing his latest variation on his cranky-old-guy shtick) don’t find fresh emotional terrain in this dully inspirational story.

Million Dollar Arm makes vague stabs at commenting on the economic disparity between rich and poor parts of the world — not to mention musing on the mystery of athletic greatness — but the film ends up feeling like highly polished product, not the result of a driving passion or obsession. That’s even more disappointing since one of the film’s main messages is that people are happier when they’re doing something that they love. An odd credo for a movie that’s so programmatic.