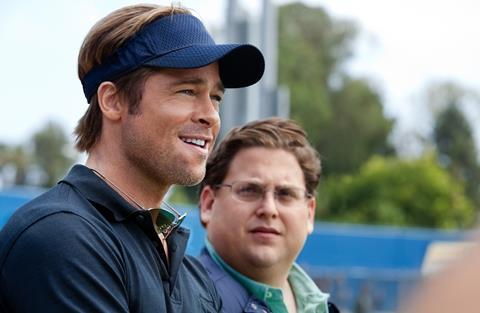 Brad Pitt invests Columbia’s behind-the-scenes baseball film Moneyball with a quiet sense of dignity and commitment, and while there is a whole lot of subtle drama and elegantly staged moments the film is too one-tone to grip and never quite as thoughtful as it appears on the surface.

Intriguing and beautifully presented and featuring a mature and compelling performance by Brad Pitt.

The casting of Pitt and Jonah Hill will aid profile - the film has been talked up as an awards contender for some time - but whether a subtle baseball drama can work in territories with little knowledge and/or interest in the sport is a moot point. The underlying rags vs riches story of a poorly funded team slugging it out against super-rich competition has been told before, but here Moneyball relies on character studies rather than home runs, meaning much will rely on Pitt’s star power rather than the usual clichéd sports movie moments.

Screenwriters Aaron Sorkin (on a roll from last year’s The Social Network) and Steven Zallian have astutely adapted Michael Lewis’s non-fiction book Moneyball: The Art of Winning an Unfair Game, which details the controversial scheme by the Oakland A’s general manager Billy Beane (Pitt) to turn baseball on its head by selecting players by crunched statistics rather than old-fashioned scouting.

Impressively directed by Bennett Miller (who made Capote) the film sees Beane recruit nerdy Yale economics graduate Peter Brand (Jonah Hill), who has formulated a defiantly complex formula (inspired by baseball statistician Bill James’ Sabermetrics, which analyses players through empirical evidence and player statistics) and between them the pair start rebuilding a team for the A’s 2002 season.

The film’s choicest moments come as Beane and Brand sit in a room full of old and grizzled seen-it-all, done-it-all scouts and baseball experts - the former heartbeat of the old recruiting system - and tell them which players they will be bringing in.

For a moment the film looks like it is heading into Bad News Bears and Major League territory as it appears a bunch of unwanted misfits are to be the core of the new look team. But shrewdly the film spends little time with the team, instead dwelling on Beane - who had failed as a pro-player, but worked his way up the scouting ranks - and his relationship with Brand as they look to change baseball forever.

And while that core concept sounds dramatic, in fact the film potters along in an engagingly scattershot manner offering up some nice bits of dialogue rather than any action or emotional highs. Beane is estranged from his wife (played in a one-scene cameo by Robin Wright) but close to his guitar-playing daughter (Kerris Dorsey) and has a quirk that he refuses to watch games for fear of jinxing the team, but these are the nearest we get to any real character insight.

Brad Pitt is watchable and engaging as the fast-talking and committed Billy Beane, adopting his Oceans Eleven quirk of eating and drinking in pretty much every scene, and while Jonah Hill is spot-on casting as the chubby and nerdy baseball buff, there is nothing about any kind of personal life. Philip Seymour Hoffman (who starred in Miller’s Capote) features as the team’s shaven-haired coach Art Howe, but is largely wasted in a role that asks him to argue with Beane a little, but spend most of the time in the dugout watching his team.

Sports fans may well get a kick out of the behind-the-scenes machinations that drive professional baseball - and baseball fans may well love the whole obsession with statistics - but the film eschews any real attempts at traditional dramatic arcs but simply moving along at a gentle pace trading on attention to detail, performance and smart dialogue.

As the Moneyball reaches its climax the filmmakers can’t quite resist a couple of home-run moments - what baseball film would be complete without one? - but never surrenders its determination to make the back room boys the ‘heroes’ rather than the over-paid players. And while intriguing and beautifully presented and featuring a mature and compelling performance by Brad Pitt, Moneyball is oddly never as engrossing as the subject matter suggests it should be.