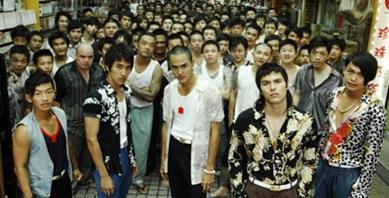 Monga is a dynamic and powerfully impressive Taiwanese gangster film set against the stunning backdrop of Taipei of the 1980s as a group of teenagers become men as they fight to survive amongst the gangs that run the old Monga quarter of the city.

Monga has the style and panache to find an internarional audience and could be a cult hit for sales agent Distribution Workshop.

The film is a stylish whirlwind ride of colour and action, with everything brilliantly choreographed by director Doze Niu (who made What On Earth Have I Done Wrong? in 2008), who also plays an effective cameo as a chain-smoking gang boss. Monga has the style and panache to find an international audience and could be a cult hit for sales agent Distribution Workshop.

The gangland epic may well be a standard movie genre, but Monga is distinctive both in the era it is set (bright shirts, audio cassettes, the odd floppy haircut and an innocence in amidst the gang politics) and the fact that it focuses on friendship and brotherhood rather then bloodshed and mayhem.

Mosquito (a charismatic Mark Chao) moves to Monga, and is taken under the protection of Dragon Lee (Rhydian Vaughan), son of local gangster Boss Geta, and his friends Monk, Monkey and A-Po. They become young members of the Temple Front Gang.

Shy and defensive Mosquito enjoys a brotherhood he has never experienced before, and accepts the gang status because of his commitment to his band of brothers. They group relish the lifestyle – and since it is the 1980s they also hit the discos – but gradually come to see the brutal realities of gang membership.

When outside ‘Mainlanders’ look to move in on the Monga gangs, lines are drawn and loyalties are divided, and the young’s gang members find themselves in the middle of a gang war.

This classy Taiwanese film has a refreshing sense of nostalgia. It may be somewhat traditional in structure (Mosquito falls for the obligatory tainted-but-lovely prostitute Ning, who is unpopular because of the large birthmark on her face) but it is a vivid and exciting recreation of an era. The fight sequences are stylish and exciting and the performances all spot on, with Mark Chao particularly impressive as the young man whose love of brotherhood becomes increasingly fierce as he aligns himself with the gang.

Director Noze Niu (who also produces and co-scripts) shows Monga as a hip and cool town, blending the legacies of its Chinese and Japanese past with the advent of Western fashions. Monga is a seriously cool gangster film that deserves to find exposure beyond the festival circuit.