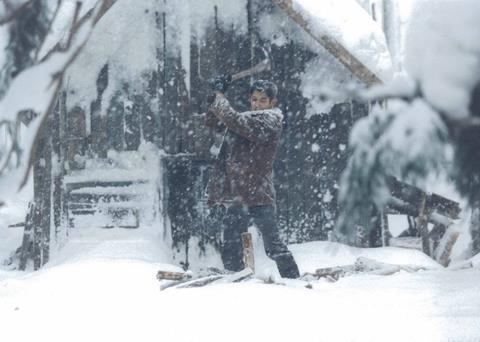 Though inspired by Unabomber Ted Kaczynski’s manifesto “Industrial Society and Its Future,” Monsters Club quickly departs from its anti-establishment set-up to tell a more mournful story about life and death, grief and acceptance. This subtle, sombre film could find a home on the festival circuit, but wider play is unlikely.

Toyoda leaves the viewer with words from a poem and a silent cry of angst.

When we first meet protagonist Ryoichi Kakiuchi (Eita), he’s living alone in a secluded cabin in a mystical windblown snowy forest. While writing screeds about the dangers of society, conformity and control, he builds intricate homemade bombs in briefcases, which he sends off to murder the heads of media and other industries. In an early extended voiceover narration, Ryoichi’s modus operandi is made clear: “Freedom is power,” he says. Rather than live within industrial society among the complacent masses, he aims to destroy it.

But maverick filmmaker Toshiaki Toyoda (Nine Souls) rarely leaves the cabin and its wintry environs. In an inspired prologue sequence, a bomb is delivered to a CEO, and the camera never leaves the inside of the briefcase — an indication that the film is less concerned with the outside world than Ryoichi’s tortured psyche.
Indeed, this slight, albeit absorbing little film, quickly becomes a kind of Japanese ghost story; call it a dark-edged “It’s a Not So Wonderful Life.” First, Ryoichi starts seeing a demon in the snow: a white-faced figure with a red-painted mouth and blue-smeared eyes. Then he’s visited by another creature who transforms into his younger dead brother.

Toyoda accompanies these eerie visits with a dissonant, effective sound design filled with high-pitched tones and disturbing drop-outs on the soundtrack. The conversations, however, bring forth the more conventional substance of the film: The young reclusive terrorist is actually less haunted by society’s ills than the death of his family members.

Soonafter, other figures follow: a real-life visit from his younger sister, his last remaining living relative, and more potently, his deceased jaded older brother, whose death from suicide comes to represent Ryoichi’s biggest internal conflict: To be or not to be.

Toyoda is a solid craftsmen, and the film’s cinematography — aided by the beautiful wintry locations — make for compelling visual images and striking contrasts: for example, the blood of a dying deer against the snowy ground.

But despite the talent in the filmmaking, Monsters Club doesn’t rise to its potentially provocative blending of social commentary with psychological insight. His rebellious tendencies ultimately come across as rather simplistic, as do his personal traumas. And when the connection between the two becomes explicit, the primary “monster” — Ryoichi himself — appears to be nothing more than a fragile adolescent-adult.

The film’s ending reinforces its strengths and weaknesses. Despite some striking images, the character’s final reconciliation — with both his own grief and society itself - is not fully addressed. Rather than truly confront the movie’s demons, Toyoda leaves the viewer with words from a poem and a silent cry of angst.