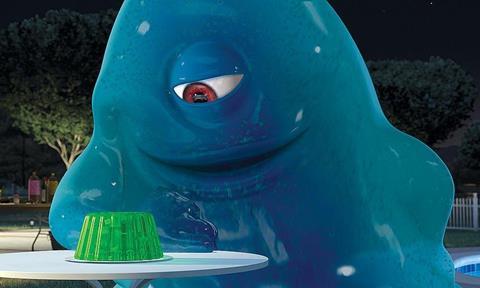 Meticulously constructed to tickle the fancy of every pre-teen boy on the planet, Monsters Vs. Aliens has everything: monsters, aliens, robots, spaceships, heroic feats, and cool explosions, all in innovative 3D animation. With a witty script and a collection of adorable characters, the latest offering from Dreamworks Animation brandishes the studio’s typical secret weapons - a breezy, pop-friendly sheen and a star-studded voice cast - and although this action-comedy doesn’t have a lot of emotional depth, it’s such a well-designed crowd-pleaser that it feels churlish to quibble.

Opening March 27 in the US and quickly expanding across the globe, Monsters Vs. Aliens should appeal to the same broad audience which made previous Dreamworks Animation films like the Shrek trilogy such massive hits. With Race To Witch Mountain the film’s only real family-movie competition, Monsters Vs. Aliens seems poised to be a breakout success.

On her wedding day, Susan (voiced by Reese Witherspoon) is hit by a meteor whose interstellar properties cause her to morph into a 50-foot giant. The US government whisks her away, incarcerating her with fellow monsters such as a half-cockroach scientist (Hugh Laurie), a gelatinous blob (Seth Rogen) and a fish-ape hybrid (Will Arnett). But when the evil alien Gallaxhar (Rainn Wilson) invades Earth, only the monsters can stop him.

Though Dreamworks Animation has been consistently successful commercially, enjoying hits with Shrek, Madagascar, and last year’s Kung Fu Panda, the films have been knocked for their reliance on incessant pop-culture referencing and a lack of well-developed central characters. Neither of these problems is completely rectified with Monsters Vs. Aliens, but the film, co-directed by Conrad Vernon (Shrek 2) and Rob Letterman (Shark Tale), licks the problem by being genuinely funny and charming.

The script, credited to five screenwriters and an additional storywriter, fondly recalls several sci-fi conventions, particularly the boyish glee of super-powerful killer robots and the threat of planetary destruction. And while there are references made to Close Encounters Of The Third Kind and E.T., the humour more often builds from the lively interplay between Susan and her monster compatriots than from the simple recycling of shared cultural totems. Tellingly, a melodramatic subplot concerning Susan and her self-centred fiance (Paul Rudd) fails to generate much emotion - this cheery sci-fi monster flick is on much firmer footing when it just aims for laughs.

Special kudos goes to Leslee Feldman, who has cast the film superbly, finding the right personas to fit these animated characters. Witherspoon provides her all-American-girl sweetness to Susan, a kind young woman who learns the value of independence, while Laurie’s droll British sophistication works well for a mutant scientist who’s not nearly as brilliant as he’d like to think. However, it’s Rogen who’s the real star of the film as the lovably hilarious and clueless blob.

The 3D animation is impressively rendered, although there are a few occasions when the filmmakers can’t resist having objects fly right into the face of the viewer in a cutesy way. Monsters Vs. Aliens features two extended action sequences, but the first one - involving an alien robot’s assault on San Francisco - is far superior, creating a bit of a disappointment later when the finale’s big showdown between the monsters and Gallaxhar falls flat. The Dreamworks animators may not be able to match the artistry of their peers in Pixar, but the film has an unquestionably rich look.