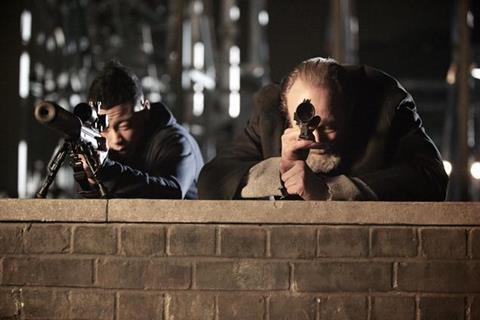 A slickly made British urban revenge thriller, director Mo Ali’s Montana – which looks to combine the style of local crime drama Kidulthood with the themes of Luc Besson’s Leon – may well be rather by-the-numbers in terms of its plotting and structure but it is astutely aiming to come up with a fresh style of local genre film that blends gang violence with a broader story of a young man being mentored to kill.

Newcomer McKell David has natural charisma and as the stoical single-minded assassin Lars Mikkelsen has the right balance of dark determination with the weight of sadness on his shoulders.

The gritty London locations and casting of Ashley Walters and Adam Deacon means that the film, which opens in the UK on December 11, harks back to local gang films such as Kidulthood, Adulthood, Top Boy and urban comedy Anuvahood while the addition of a grim-faced Lars Mikkelsen (The Killing, Headhunter) gives it a more sophisticated edge and could help it work in markets outside the UK.

Screen newcomer McKell David plays Montana, a 14 year-old who aspires to be a drug-dealing gangster in London’s East End, using his school blazer and lunch box as a disguise to carry drugs for a local gang boss. When he is targeted to be killed when a deal goes wrong he is saved by Dimitrije (Lars Mikkelsen), a former Serbian assassin who has comes looking for the gang boss in order to take revenge for the death of his wife and son.

When it turns out Ratko, the gang boss, was also behind the killing of Montana’s father the youngster joins forces with Dimitrije, offering his knowledge of the streets in exchange for training on how to kill. Soon Dimitrije teaches him the dark arts of the assassin, while also advising him on how to live after the mission, when honour and respect must come into play.

Initially the film finds it hard to string together London street gang drama with the tale of a Serbian assassin limping the streets killing by knife or gun in his bid for revenge, but once it settles into the master-pupil aspect it settles down, with the relationship between Montana and Dimitrije taking over. It all heads towards an expected bloody climax, but at certainly succeeds as a gritty crime thriller.

There are perhaps too many clichéd characters – the boozy corrupt cops are wearyingly familiar – and not enough is really made of Ashley Walters (especially) and Adam Deacon, who have followings of their own in the UK, but newcomer McKell David has natural charisma and as the stoical single-minded assassin Lars Mikkelsen has the right balance of dark determination with the weight of sadness on his shoulders.