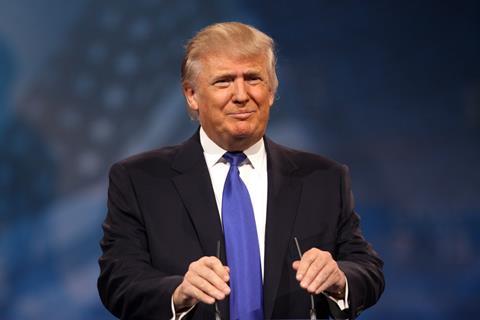 A number of leading figures in the film and TV industries have responded with shock and dismay to the surprise win for Republican candidate Donald Trump in the US presidential election this week.

Democrat nominee Hillary Clinton drew tens of millions of dollars in contributions from the entertainment industry during the heated contest. Opponent Trump received a fraction of that support.

Meanwhile, actors Stephen Baldwin, Steven Seagal and Kirstie Alley were among those to voice enthusiasm for the result.

Screen rounds up some of the reactions:

Harvey Weinstein, producer, said in a comment sent to Screen:

“With both Donald and Hillary [Clinton] splitting the popular vote of Americans 50/50, I was proud to see Hillary say this morning that she would work with Donald because that’s what our country wants to see. One of the great things President Obama did was taking a page from Lincoln’s playbook — taking on rivals and working together with them in the White House. It takes a willingness from both sides, however, and our country is sick and tired of the divisiveness in D.C. It is my hope that President-Elect Trump will do this with Hillary and others. It will make people less fearful, which I’m sure he wants, and it’s what we need as a country.”

“This country was founded on immigration and today the only people that feel safe, that their rights are recognized and respected are white men.

I want to be positive; I want to support our democracy, but what can we take away from this? It’s a genuine question that we all need to ask ourselves. We shouldn’t blame anyone, we shouldn’t riot in the streets. We should think strongly and clearly about what to do next because we cannot change the past.”

Adam McKay, writer and director of The Big Short:

Miley Cyrus, actress and musician [in a tearful Twitter video]:

Laverne Cox, transgender rights activist and star of Orange Is The New Black:

“I am addressing this to all who voted to defeat Donald Trump and what he represents. We may not have prevailed, but we must not despair.

Many of you are, like me, in a state of shock. This does not feel like the America you love and honor. We are in unchartered waters. In times like these we must reaffirm the values we cherish and have fought for: equality, justice, the care of our planet. We must stand up defiantly to any dark or divisive acts, and look out for the most vulnerable among us. It is more important than ever.

Within our hearts we know the society we wish to live in. No one can take that vision from us. We are each of us keepers of that promise. This country has seen wars and grave injustices, slavery and even civil war in its past. Yet we found our way through.

Hold your loved ones close. Tell them that it is in times of sadness and in the toughest of days where we often find our true mettle.”

Parallels drawn on PBS with BerlusconiAnxious folk like authoritarian figures

Soon the REAL work begins to #MakeAmericaGreatAgain
Proud to have been a part of such amazing history @realDonaldTrump pic.twitter.com/YDWANm2YEZ

Kirstie Alley, US actress and comedian: