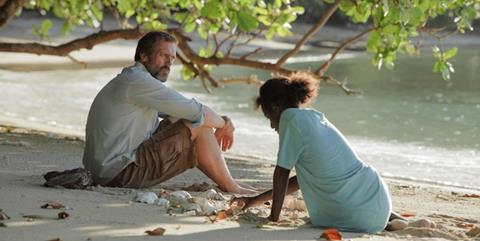 Charles Dickens is digested in Bougainville in Mr. Pip, Andrew Adamson’s ambitious re-telling of Great Expectations by way of adapting Lloyd Jones’s novel. It’s ambitious, it’s bloody and it’s confusing.  This sprawling dramatisation is sure to be a curiosity, if not more, among Dickens devotees, and there are many, but there are many retellings of Dickens classics in the marketplace – in and out of other works of literature – and their natural destiny is usually television rather than the big screen. Outside the English-speaking world, the market for Mr. Pip may be small.

Laurie as a teacher attempting the impossible, taking a community from pre-history into circumstances beyond their control, bares the helplessness of the outside world as the horror of history unfold.

Adamson’s film reaches far and wide to capture the scope of Jones’s novel, following a young girl from her initiation to Dickens by a British ex-pat teacher (Hugh Laurie as the last white man in war-ravaged Bougainville), to the viciously brutal murder of her mother and others by Papuan troops, to her reconnection with a long absent father and a final stop in England. And that’s just the itinerary.

At the center of the coming of age story, if a genre has to be assigned to it, is young Matilda, a beautiful Bougainvillean whose mind at 14 goes into high gear when she imagines her version of Dickens’s world. Those reveries are staged as period pieces with Bougainvillean characters in costumes of hallucinatory colors.

Idyllic Bougainville is nothing like paradise, however, as poor uneducated peasants try to survive between the local starving rebels and cutthroat troops who arrive by helicopter to terrorize them. As Mr. Watts, the teacher who fled London for the tropics, Hugh Laurie is anything but a romantic in this year’s twist on the To Sir With Love role. The distrust of the locals and the savagery of the army are scratched into lines on his face as the story progresses.

Yet coherence erodes over the course of that same story, with blocks of narrative in one location lumped after sections in another place, and book-ended with visions of Great Expectations pageantry. You get the feeling that the choppy sectioning of narrative parts came from an urgency to keep the film short - at 130 minutes. Had it been longer, or had it been a mini-series, more scenes would have made more sense.

Still, Laurie as a teacher attempting the impossible, taking a community from pre-history into circumstances beyond their control, bares the helplessness of the outside world as the horror of history unfolds. Scenes of grotesquery – in body parts alone – could be lifted into Saw. Vivid cinematography by cinematographer John Toon ensures that you don’t miss the brutal or the beautiful.  Part of Toon’s brief is to show that the most breathtaking landscapes can be the backdrops for atrocities.

And beautiful is the appropriate description for Xzannjah Matsi, who metamorphoses in Mr. Pip from a shy village girl into a young woman of composure, by way of Dickens, a burned village and some ghastly public executions.  The actress (and her director) chose wisely not to compete in histrionics with the horrors of the story. Less in Matsi’s approach to acting is very much more here.

Despite his over-abbreviated adaptation, Andrew Adamson (Shrek 1 and 2, Chronicles Of Narnia: Prince Caspian) can probably take credit for bringing potential readers, the new Matildas, to Lloyd Jones and Charles Dickens. Xzannjah Matsi probably doesn’t have to worry about her audience.