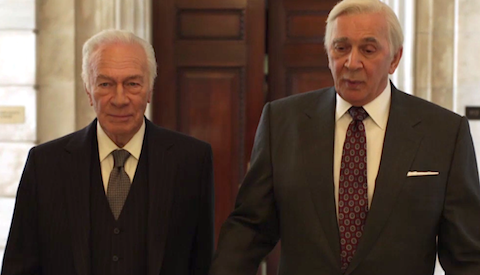 History lessons should be as much fun to follow as Stephen Frears’ history-linked films. Whether Muhammad Ali’s Greatest Fight - or for that matter, such earlier films as The Deal or The Queen - are exact replicas of the events they portray somehow seems less relevant as long as the result is entertaining. This HBO production with a solid, reliable and very experienced top flight cast, including the likes of Christopher Plummer and Frank Langella in the leads, could eventually have a chance at overseas theatrical distribution as well.

In between the coups and the shenanigans behind the scenes, Frears inserts brief personal insights on the family life of his protagonists.

Working with South African scriptwriter Shawn Slovo (A World Apart) from a book by Howard L. Bingham and Max Wallace, Frears looks at the one battle Muhammad Ali won outside the ring, a victory that got him as much, if not even more, glory and laurels than the ones he got using his fists.

Only 22 when he took the world heavyweight championship title from Sonny Liston, the former Cassius Clay first told the world that he had joined the Nation of Islam, changing his name to Muhammad Ali and then, three years later scandalised public opinion in US when he declared himself a conscientious objector and refused to serve in Vietnam, claiming no Viet Cong has ever called him a ‘dirty nigger’ and therefore he has no reason in the world to shoot any of them.

Publicly denounced, stripped of the world title and forbidden to leave the country, his case finally reached the Supreme Court of Justice 1971, but by then public opinion had radically changed and Ali had regained much of the sympathy that had been denied to him before. At this point, Frears steps in.

A wittily drawn portrait of the highest judicial instance in the US and of the techniques and rituals which often determined the course of law, Frears shows the conflicts between assertive President, Warren Burger (Langella) whose personal relations with Richard Nixon had an impact on his decisions more than once, and the other eight Justices, who, even if they differed in their opinions, were finally swayed more than once to go along with Burger’s decision, if only to show the nation a united front.

Most of the script’s attention is lavished on Burger and John Harlan II (Christopher Plummer), a conservative with an open mind, with additional effective one-liner quips provided by the ancient, recalcitrant Hugo Black (Fritz Weaver); the determined liberal William Douglas (Harris Yulin) or by Thurgood Marshall (Danny Glover), the only black member of the Court, who refused to vote on this case because of his aversion to the concept of the Nation of Islam.

In between the coups and the shenanigans behind the scenes, Frears inserts brief personal insights on the family life of his protagonists and turns one clerk, Kevin Connolly (Benjamin Walker) in Justice Harlan’s chambers into a major factor responsible for changing the verdict on the Ali case at the last minute. He copiously spreads archival footage all over the place, displaying Muhammad Ali’s flamboyant public statements, often in verse and allowing him to become a full-fledged character in his own right, without using an actor impersonate him. Additional footage of the demonstrations that rocked Washington at the time, contribute to a large extent, not only to wrap up the case but the war as well.

Screenplay: Shawn Slovo based on the book by Howard L. Bingham and Max Wallace