My Tehran For Sale 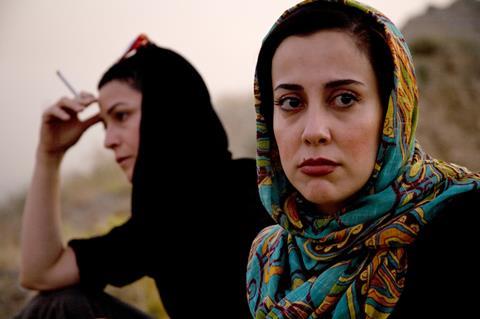 Shot undercover in Iran’s teeming capital, this brave low-budget film speaks volumes about the everyday repressions faced by middle-class, literate Iranians — a focus only intensified by the recent presidential election and its continued aftermath of mass protest and state-sanctioned clampdown.

Shot mainly in Farsi with English sub-titles and with key scenes featuring lengthy examples of mimed underground theatre, Iranian poetry readings and protest songs, this film is evidently a festival ticket – bowing at Adelaide and screening at Toronto. Set for local distribution in Australia in November through Cyan, it will have a tough haul in the commercial marketplace, but as a passionate cry for international understanding and a stirring example of hit-and-run moviemaking, it can’t be overlooked.

Writer-director Granaz Moussavi is an established Iranian poet with several volumes of published verse. Migrating to Australia in 1997 with her family at the age of 22, she went on to graduate in filmmaking and editing. With this debut feature she returns to her native Tehran, employing former friends as lead actors and imbuing her fact-based tale with an angry personal intensity.

Strikingly attractive, if unrelentingly mournful, Marzieh Vafamehr dominates the screen as a dedicated fringe actress (also named Marzieh) who sees a rare opportunity to escape the state’s persecution of her art when she meets Saman (Chegini) at an illegal after-hours disco. He’s a tall, dark Iranian who, through his family’s emigration, now has Australian citizenship.

The disco is raided by an outraged militia: “Do you think this is Europe?” one cries, lashing out. Marzieh and Saman start a relationship, become engaged and she begins the lengthy and often corrupt process of applying for a visa to enter the Australian ‘paradise’ that Saman talks about.

Costs mount; then crushing news arrives that forces her to take ever more desperate measures. She sells all her possessions, and bids farewell to her colleagues, her coldly unforgiving family and the sprawling, unlovely city that she knows she will sorely miss.

Keeping a low profile during the six-week location shoot was an absolute requirement: director Moussavi and her female cinematographer (Bonnie Elliott) wore headscarves and whole body coverings in the 40+ heat. The authentic handheld digital footage was spirited out of the country on hard discs to be edited in Adelaide with some skill by Bryan Mason. He fractures the narrative, forcing the audience to reconstruct the original sequence of events.

Although there is perhaps too much here of Marzieh gloomily pounding the streets of inner Tehran, there’s also a magical sequence high on a hill overlooking the vast city where she sits with her worried friend Sadaf (Mehrabi) and delivers some heartfelt wails into the gathering dusk.

While My Tehran For Sale takes a welcome focus away from poor, working-class Iranians, there’s a serious-minded preciousness about Marieh’s middle-class arty endeavours that can be hard-going, particularly the Marcel Marceau mimes and the intensely serious poetry readings. And the film’s concluding song, though powerfully delivered, keeps repeating the deadly phrase that is the song’s title: “Neo-Kantian ideology”.

VERDICT: Cry from the heart is a surefire festival favourite