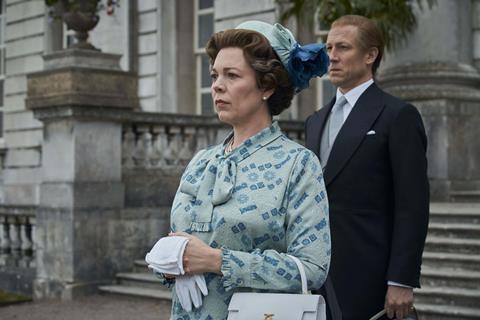 The Crown gave Netflix its first ever best drama series win at the 73rd Primetime Emmy Awards on Sunday, with the streaming giant also beating out regular awards rival HBO for the first time by taking the biggest overall Emmy haul.

Starting with 129 nominations, Netflix took 10 awards during Sunday’s ceremony to add to the 34 it had scored during earlier Creative Arts Emmy events, for a total of 44 awards overall. That equalled the record for a single network in a single year, set by CBS in 1974.

HBO and HBO Max, which began with 130 nominations between them, together claimed nine Emmys at the live ceremony in Los Angeles on Sunday for an overall tally of 19. Disney+ ended up with 14 Emmys overall and Apple TV+ ten.

The Crown had the biggest haul for a single show with seven Emmy statuettes on Sunday for a total of 11 overall. The Queen’s Gambit had two wins on the night, for another 11 tally, while Ted Lasso netted four on Sunday for seven overall.

Surprises during the ceremony included The Crown’s Olivia Colman winning best actress in a drama series over the same show’s hotly tipped Emma Corrin and Ewan McGregor, from Halston, winning for lead actor in a limited series rather than The Undoing’s Hugh Grant.

British on-screen talents – who gave Sunday’s ceremony its liveliest acceptance speeches – made a strong showing, with The Crown’s Josh O’Connor, Tobias Menzies and Claire Foy celebrating along with Colman and McGregor, Kate Winslet winning for Mare Of Easttown and Hannah Waddingham and Brett Goldstein taking trips to the podium for Ted Lasso.

British creatives celebrating included The Crown creator Peter Morgan, winner in the drama series writing category after three previous nominations, and Michaela Coel, a crowd-pleasing winner for writing her acclaimed limited series I May Destroy You.

As the first major awards show to require vaccinations for all attendees, Sunday’s Emmy ceremony took place in an air-conditioned tent near downtown Los Angeles’ Microsoft Theater, with a limited audience (only four tickets made available per nomination) sitting at dinner tables. Most of the winners from The Crown accepted via satellite from their own party in London.

Hosted by Cedric The Entertainer, the controversy-free show opened with a rap singalong number and was notably diverse in its presentation, though not a single performer of colour won in the major acting categories. Several presenters eulogised Michael K Williams, a strongly favoured nominee as supporting actor in a drama series for Lovecraft Country, who died two weeks ago, just after Emmy voting closed.

The Crown, which had been nominated for best drama series three times before, was widely expected to dominate, given that last year’s winner in the category, Succession, was not eligible because of pandemic-related production delays. The fourth season of the UK-made series also benefitted from a high-profile Charles-and-Diana storyline that was devoured by a captive pandemic audience.

The first season of UK-shot Ted Lasso was also predicted to be a big winner, thanks partly to its warm comic tone and the absence of last year’s dominant, and now-ended, comedy series Schitt’s Creek.

This year’s limited series category was much more competitive, with The Queen’s Gambit, Netflix’s most-viewed limited drama to date, up against other critically praised projects including HBO and the BBC’s acclaimed I May Destroy You, Amazon Prime Video’s challenging The Underground Railroad and HBO’s recent hit Mare Of Easttown. The category was recently rejigged to include anthology as well as limited series, and though no anthologies were nominated this year the change means that competition could be even fiercer in the future.

In the lead drama actress category, Corrin, who only appears in one season of The Crown, had been thought a more likely winner than Colman, who is leaving the show after two seasons.

The three Creative Arts Emmys ceremonies that took place last weekend saw several feature documentaries honoured in the last awards round during which documentary films can qualify for both Oscar and Emmy consideration.

LEAD ACTRESS IN A DRAMA SERIES

LEAD ACTOR IN A DRAMA SERIES

Sterling K Brown (This Is Us)

LEAD ACTRESS IN A COMEDY SERIES

LEAD ACTOR IN A COMEDY SERIES

LEAD ACTRESS IN A LIMITED OR ANTHOLOGY SERIES OR MOVIE

Michaela Coel (I May Destroy You)

LEAD ACTOR IN A LIMITED OR ANTHOLOGY SERIES OR MOVIE

SUPPORTING ACTRESS IN A DRAMA SERIES

SUPPORTING ACTOR IN A DRAMA SERIES

Chris Sullivan (This Is Us)

SUPPORTING ACTRESS IN A COMEDY SERIES

SUPPORTING ACTOR IN A COMEDY SERIES

SUPPORTING ACTRESS IN A LIMITED OR ANTHOLOGY SERIES OR MOVIE

SUPPORTING ACTOR IN A LIMITED OR ANTHOLOGY SERIES OR MOVIE

Paapa Essiedu (I May Destroy You)

DIRECTING FOR A DRAMA SERIES

DIRECTING FOR A COMEDY SERIES

Lucia Aniello, Hacks, ‘There Is No Line’ (pilot) (HBO Max)

DIRECTING FOR A LIMITED OR ANTHOLOGY SERIES OR MOVIE

WRITING FOR A DRAMA SERIES

Rebecca Sonnenshine, The Boys, ‘What I Know’ (Amazon Prime Video)

WRITING FOR A COMEDY SERIES

WRITING FOR A LIMITED OR ANTHOLOGY SERIES OR MOVIE

Michaela Coel, I May Destroy You (HBO)

The Bee Gees: How Can You Mend A Broken Heart (HBO)