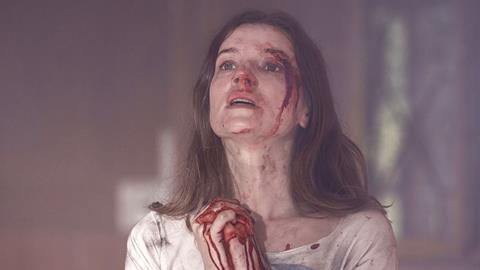 Liam Gavin’s occult horror stars Sightseers’ Steve Oram and Catherine Walker, and follows a young mother who is determined to avenge the murder of her child with the help of a hard-drinking occultist.

Locking themselves into an isolated house, they perform a magic ritual to enlist the help of the supernatural world, but secrets from their pasts unleash darker powers.

After its world premiere at Galway Film Fleadh, the film has screened at Fantastic Fest, Sitges and BFI London Film Festival. It will make its sales debut at the upcoming AFM.

“We’re thrilled to be working on Liam’s debut, a film which is both darkly unsettling and ultimately moving. After a stream of critical acclaim, we look forward to sharing this gem with international buyers,” commented Michael Chapman, acquisitions & development executive of KFD.

The deal was signed by Kaleidoscope’s Spencer Pollard and Chapman in conjunction with David Collins of Samson Films.

Collins added: “We are delighted at the festival response to A Dark Song. It’s a great vote of confidence in the film that Kaleidoscope have stepped up so quickly to handle the world sales and to release it theatrically in the UK and Ireland. Together with XYZ who represent the film in North America, we now have all of the bases covered for AFM.”

Produced by David Collins, Tim Dennison and Cormac Fox, the film was financed by The Irish Film Board and Ffilm Cymru Wales, with additional support from the Irish S481 tax incentive and Windmill Lane Post Production.