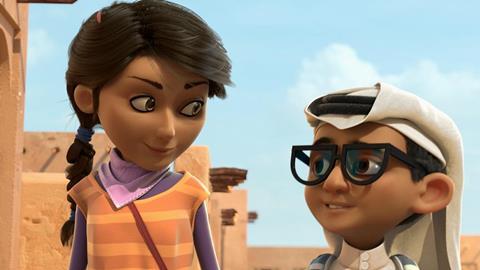 Films shot by Qatari nationals and those who call Qatar their home are to be showcased at the inaugural Ajyal Youth Film Festival (Nov 26-30), presented by the Doha Film Institute, in a Made in Qatar strand.

The programme will highglight the works of filmmakers across three segments.

The first will feature the works of winners from the Doha Film Institute’s 48-Hour online Family Film Challenge; the second from the 7-Day Filmmaking Challenge, both of which were open to filmmakers from across Qatar; and the third which will include the screening of Batal Wa Resalah (The Hero and the Message), from Al Rayyan Productions.

Ajyal festival director Fatma Al Remaihi said the Qatar strand would “honour the dedication, creativity and unique voice of our homegrown talent in front of a wide audience”.

She added that the festival is “dedicated to supporting local filmmakers and to introducing their work to the world.”

The Hero and the Message was commissioned by Al Rayyan TV to celebrate Qatar National Day 2012 and ‘’ tells the fantastical tale of a Qatari brother and sister who travel back in time to witness the founding events of the State of Qatar in the 19th century.”

The screening on Nov 29 will be followed by a Q&A with the Qatari talents.

The 48-Hour Family Film Challenge will put emerging filmmakers to the test, by launching an online film challenge. Participants in teams of three or four will be tasked to produce a five-minute film using a mystery prop and catchphrase.

Two winners will be voted for by the audience via dedicated social media outlets. The ‘Made in Qatar’ programme will announce the two winners, followed by screenings of their films during the Ajyal Youth Film Festival.

Tahaddi, the 7-Day Filmmaking Challenge, part of the Gulf Development Unit at the Doha Film Institute, aims to teach the process of creating short films – from conceptualisation right through to execution – in just seven days.

Seven films from this year’s Tahaddi programme will be screened as part of the Made in Qatar programme. The selection includes:

Featuring films from Brazil, Canada, France, Mexico, Palestine, Qatar, Spain, UK, and US, the Special Screenings segment will also host the screening of Pascal Plisson’s On the Way to School, in collaboration with the Education Above All Foundation (EAA) in support of its Educate A Child programme.

Included in the Special Screenings strand is the Qatar Year of Culture Cinema Showcase, marking the collaborative efforts of the Doha Film Institute with the British Council and Qatar Museums Authority, including classic and contemporary films from the British canon.

The screening from the UK will be followed by a film from Brazil, marking Qatar’s ongoing official relations with Brazil.

The Doha Film Institute partnered with the British Council and Qatar Museum’s Authority to present monthly screenings throughout 2013. These celebrations will culminate with a special screening of British director Arthur Landon’s Side by Side.

The film will be preceded by the screening of Carioca Soul, made in 2002 by Brazilian filmmaker William Côgo.

Nitin Sawhney and Roger Hill’s Palestine-US co-production, Flying Paper, is a documentary on children in Gaza, who are on a quest to scoop the Guinness World Record for the most kites ever flown.

On the Way to School, a co-production between France and Mexico, by Pascal Plisson follows four students – Jackson, Zahira, Samuel, and Carlito, from Morocco, Kenya, India, and Argentina respectively.

A Shout from Within by Jan Xavier Pacle from Qatar, captures the lives of eight students from the Filipino community in Qatar, all from different backgrounds, each with their own personal struggles to overcome.

Canadian filmmaker Eric Tessier’s The Pee-Wee 3D: The Winter That Changed My Life , conveys the dedication of 12-year-old Janaeu, to make it to the pee-wee hockey team in a hockey-obsessed community in Quebec.

Manuel Sicilia’s Spanish film, Justin and the Knights of Valour, is an animated 3D feature about a young man who embarks on a quest to become a knight, with voices provided by Antonio Banderas, Freddie Highmore and Saoirse Ronan among others.

The Ajyal Youth Film Festival will showcase a selection of in-competition films under the Doha Film Experience ‘Mohaq’, ‘Hilal’ and ‘Bader’ segments.

Festival director Fatma Al Remaihi said: “Our young generation is the future of our country and the region. We would like to inspire them, broaden their horizons, and spark their creative interests.

“The themes, storylines, and characters in each film under the ‘Mohaq’, ‘Hilal’ and ‘Bader’ sections have been curated to motivate and trigger new thoughts and ideas for the next wave of filmmakers from the region.”

Mohaq, which derives its name from the Arabic word for ‘new moon,’ has been designed to “stimulate the minds of young audiences and encourage conversations”, for those aged 8-12.

Seven short films from across the world will feature in the showcase and titles include:

Hilal, which originates from the Arabic word for the ‘crescent’, will screen films that “trigger new thoughts and ideas amongst teenagers”.

The segment will showcase six short films and four feature films from Belgium, Colombia, Egypt, Greece, Iraq, Jordan, Netherlands, Palestine, and the UAE. The features include:

The six shorts include:

Boasting films from Denmark, France, Germany, Hong Kong, Iran, Kuwait, Poland, Taiwan, UAE, UK, and the US, the Bader section aimed at jurors aged 18-21 derives it names from the Arabic word for ‘full moon’ and comprises four features and eight shorts. Titles include:

In total, the Ajyal Youth Film Festival will feature 65 films from 30 countries

Running Nov 26-30 at the Cultural Village Katara, the festival will host the Doha Film Experience; Family Weekend; the Otaku Exhibition; and The Sandbox as well as workshops and screenings.