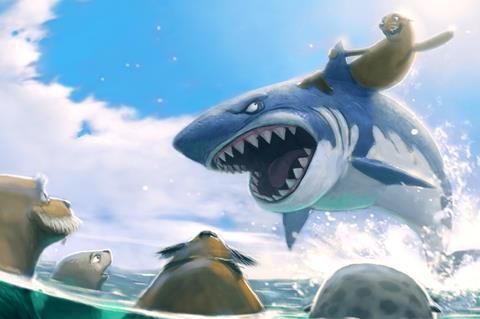 Cape Town-based Triggerfish has a strong presence at this year’s Annecy (June 11-16), where its short film Belly Flop will receive its world premiere screening at the closing ceremony, and The Highway Rat is in contention for best TV film.

The Highway Rat featuring David Tenant in lead voice role marks the third consecutive year that a Magic Light Pictures production with animation from Triggerfish is in line for the award, after Revolting Rhymes and Stick Man won the Grand Cristal Award in Annecy for TV in 2017 and 2016, respectively.

Seal Team centres on an orphan seal, Quinn, who has dodged sharks his entire life. When he loses his best friend to a great white, Quinn forms a ragtag special ops unit to fight back.

The Industrial Development Corporation, The Department of Trade and Industry, and CMG are financing Seal Team, which CMG has pre-sold to more than a dozen territories.

Triggerfish head of development Anthony Silverston said, “We’re delighted to be returning to our own IP after honing our skills on Magic Light Pictures’ BBC Christmas specials like the Oscar-nominated Revolting Rhymes. The Story Lab showed us just how many untold stories Africa has and we’re ready to get back to sharing them with the world.”

Belly Flop is co-directed by Jeremy Collins and Kelly Dillon and tells of Penny, a young diving student who becomes frustrated when a talented rival steals the limelight. Dillon won an internal scriptwriting competition at Triggerfish in 2011 and the five-minute short has been a passion project at the studio for the last seven years.

The Highway Rat is adapted from the book by Julia Donaldson and Axel Scheffler about a greedy rat that meets a sticky end. It screened on the BBC last December and recently won the audience award for three-six-year-olds at New York International Children’s Film Festival.