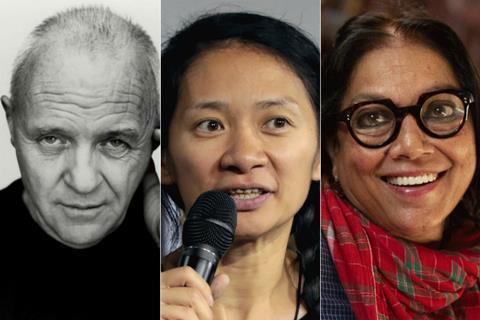 Actor Anthony Hopkins and directors Chloé Zhao and Mira Nair are to receive TIFF Tribute awards, which the Toronto International Film Festival will broadcast for the first time.

All three will receive their honours remotely during the 2020 TIFF Tribute Awards on September 15, which will be broadcast as a one-hour show on Canada’s CTV and streamed around the world. The show, produced by Bell Media Studios, will include career retrospectives and appearances from talent, who will send special messages for broadcast.

Hopkins, who won an Oscar for his performance in The Silence Of The Lambs, stars in Florian Zeller’s The Father opposite Olivia Colman, which has been selected for TIFF following its debut at Sundance.

The UK actor has previously been nominated for four other oscars  for his roles in The Remains Of The Day, Nixon, Amistad and The Two Popes. In a career spanning more than 60 years, he has also starred in The Bounty, Howards End, Hitchcock and the Thor series.

Chinese-born, US-based filmmaker Zhao will see her latest feature, Nomadland, receive a simultaneous world premiere at TIFF and Venice on September 11. The drama, starring and produced by Frances McDormand, has also been selected for New York and Telluride as part of an alliance between select autumn festivals.

Nomadland is Zhao’s third film following Songs My Brothers Taught Me and Cannes award-winner The Rider. Her other upcoming feature is superhero adventure The Eternals from Marvel Studios.

Nair is the Indian-American filmmaker behind Cannes award-winner and Oscar-nominated Salaam Bombay! and Monsoon Wedding, which won the Golden Lion at Venice in 2001.

Her latest project is six-part TV drama A Suitable Boy, of which two episodes will close this year’s TIFF. The series debuted on the BBC in the UK on July 26 and Netflix has online global rights (excluding North America and China).

The 45th edition of the festival will run from September 10-19 as a hybrid event, mixing physical and digital elements, and TIFF revealed further details of traditional, open air and online screenings this week.

TIFF’s official list of films, the screening schedule, and information on where each will screen, will be released on August 25 with an announcement on TIFF Special Events and ancillary screenings.