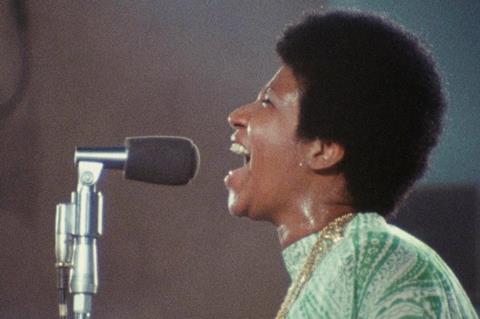 After decades of delays and an eleventh-hour intervention by the late singer herself, US viewers will finally get the chance to see the Aretha Franklin concert doc Amazing Grace in theatres. NEON announced on Friday (7) it had picked up North American rights and has set an Oscar-qualifying run in New York and Los Angeles

Realised by Alan Elliott, the 1972 concert film showcases the then 29-year-old Franklin when she was at the height of her powers and performed with a choir at the New Bethel Baptist Church in Watts, Los Angeles.

Amazing Grace does not carry a director credit, however Warner Bros Records hired the late Sydney Pollack to film Franklin’s performances over January 13 and 14, 1972, as a companion piece to her live album of the same name, which became the biggest selling album of her career.

The film remained unseen for decades, because Pollack forgot to use clapperboards, which made it almost impossible to sync sound to image. After Pollack died in 2008, Elliot took over the film and lined it up for a world premiere at Telluride, followed by Toronto. When Franklin interjected for reasons that remain unclear, the screenings were cancelled. Since her death in August, her estate has allowed the film to be seen.

Sabrina Owens, Franklin’s niece and personal representative of the Aretha Franklin Estate, said: “Amazing Grace is the heart and soul of Aretha Franklin. This film is authentic and is my aunt to her core. Our family couldn’t be more excited for audiences to experience the genius of her work and spirit through this film.”

“We are excited to light up NEON with Amazing Grace,” said the production team.

NEON brokered the deal with Endeavor Content on behalf of the filmmakers.