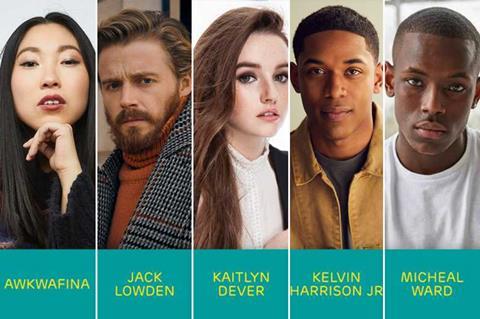 Bafta has announced the five actors in the running for the 2020 EE Rising Star Award.

The winner will be voted for by the public and announced at the British Academy Film Awards on February 2. The full list of Bafta nominations will be revealed tomorrow (Jan 7).

The nomination for Awkwafina comes after she won the best actress prize at last night’s Golden Globes for The Farewell. Her other roles include Ocean’s 8, Crazy Rich Asians and Jumanji: The Next Level.

Jack Lowden has starred in Mary Queen Of Scots, Fighting With My Family and Calibre, for which he won a Bafta Scotland award. His upcoming film roles include Cordivae and Fonzo.

Kelvin Harrison Jr. has received acclaim for his performances in Waves, Mudbound and It Comes At Night, which earned him a Gotham Independent Film award nomination for breakthrough actor.