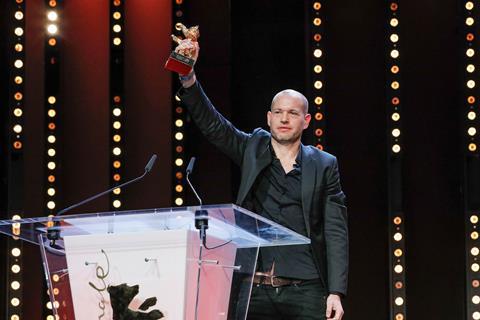 It’s the first time in the Berlinale’s history that an Israeli director has won the Golden Bear. The film is a French-Israeli-German co-production.

Lapid dedicated the award to his late mother, the editor Ara Lapid, who he described as his “most intimate artistic partner”. Synonymes was the last feature she was working on before she died earlier this year.

The International Jury headed up by Oscar-winning French actress Juliette Binoche gave its Silver Bear grand jury prize to Francois Ozon for By The Grace Of God, while two of the three German films in this year’s Competition were recognised with awards.

The Silver Bear Alfred Bauer prize for a feature film that opens new perspectives went to feature debutant Nora Fingscheidt’s System Crasher while the Silver Bear for best director was presented to Angela Schanelec for I Was At Home, But.

The Silver Bear for best screenplay was awarded to co-screenwriters Maurizio Braucci, Roberto Saviano and Claudio Giovannesi for their adaptation of Saviano’s novel Piranhas, directed by Giovannesi, while the Silver Bear for outstanding artistic contribution went to Rasmus Videbaek for his cinematography on Hans Petter Moland’s Out Stealing Horses.

Before awarding their prizes, jury president Binoche read out a statement expressing regret that they had not been able to see Zhang Yimou’s One Second which had been withdrawn from the Competition earlier in the week, allegedly due to technical problems with the film’s post-production. Thirty-one years ago, Yimou had won the Golden Bear in Berlin for Red Sorghum.

Sudanese filmmaker Suhaib Gasmelbari took home the €50,000 Glashütte Original – Documentary Award for Talking About Trees and used the platform of the ceremony to express his solidarity with his people over the unfolding political situation in Sudan.

There were a number of emotional moments during this year’s closing ceremony as festival director Kosslick and many other members of the gala audience wiped away the tears in the final love-in before his last festival edition came to a close.

Speaking at the ceremony ahead of the prize-giving and after a standing ovation for Kosslick, State Minister for Culture and Media Monika Grütters took one last opportunity to lavish praise on Kosslick for his achievements over the last 18 years in developing the Berlinale into ”the largest audience festival and the most political among the leading A-festivals”.

”With courageous steadfastness he has given freedom of art a stage and a cinema screen to politically persecuted artists,” she said. ”It is to his personal credit that he has always inspired a huge audience and whetted their appetite for great cinema. The film world also bows in gratitude to him for this.”

In recognition of ”the man who made film history”, Grütters announced that instead of giving Kosslick an honorary Golden or Silver Bear, she was making him a patron of the 27-year-old “Paddington-style” spectacled bear Puna in Berlin’s Tierpark zoo.

In addition, jury president Binoche had another surprise for Kosslick when he was presented with an oversize teddy bear on the Berlinale Palast stage before all of the award-winners were called back for a final group photograph.

Kosslick had presence of mind amidst all of the adulation directed at him from the assembled throng to welcome his successors as joint heads of the festival from the 2020 edition, managing director Mariette Rissenbeek and artistic director Carlo Chatrian, and also graciously made a mention at the end of the ceremony of a guest of honour, Moritz de Hadeln, his predecesseor at the Berlinale’s helm until 2001.

The only slight hiccup was when master of ceremonies Anke Engelke made a jibe in the direction of the Academy Awards by observing that prizes at the Berlinale closing ceremony are not given out during commercial breaks, although the quip lost any impact since there aren’t any commercial breaks on the public channel 3sat which broadcast the ceremonies live.

Meanwhile, in a fitting gesture at the beginning of the ceremony, the gala’s audience gave a standing ovation in memory of the Swiss actor Bruno Ganz, who passed away in Zurich, Switzerland on Friday night (Feb 15) at the age of 77.

Ganz, who last appeared at the Berlinale in Sally Potter’s The Party in Competition in 2017, will forever be connected with the city of Berlin through his work on the stage as part of the Schaubühne ensemble from 1970 as well as such film roles as the angel Damiel in Wim Wenders’ Wings of Desire and Faraway, So Close! and as Adolf Hitler in Oliver Hirschbiegel’s Oscar-nominated Downfall.